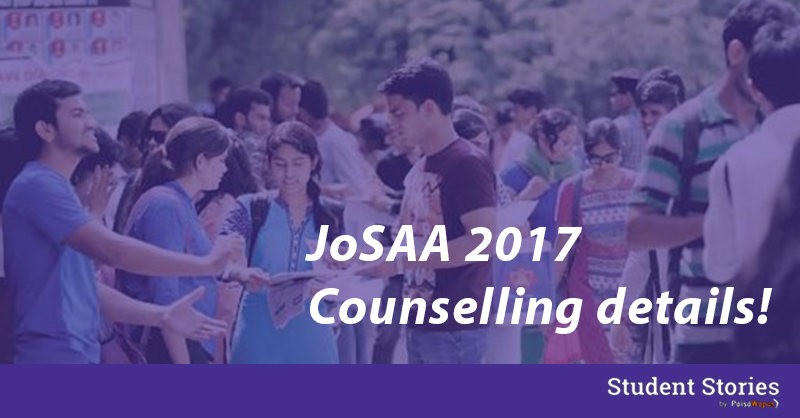 The Joint Seat Allocation Authority(JoSAA) 2017 is responsible for counselling an seat allocation of candidates who will clear JEE Main 2017 and JEE Advanced 2017. Allotment of seats in NITs, IIITs and other GFTIs will be through JoSAA counselling for JEE Main 2017 qualifying students. Similarly, admissions into IITs and ISM Dhanbad will be through JoSAA counselling for JEE Advanced 2017. Qualifying students and seats will be allotted as per merit. There are as many as 92 participating institutes of JoSAA 2017. Six rounds of counselling and seat allotment are expected for these institutes in 2017.

Moreover, it is not mandatory that qualification in the above mentioned exams will guarantee admission to any of the institutes.Candidates need to fulfill the eligibility criteria of every institute as well. Qualifications required for these institutes are available on their official websites.

In case two or more candidates have the same scores in aggregate, then their ranks will be determined by following the below given policy:

Qualifying students of JEE Main 2017 and JEE Advanced 2017 have to register themselves online and fill the programme and institute of their choice in order to participate in JoSAA 2017 counselling. Online registration for qualifying students will commence in the last week of June 2017.

The Steps for registration are:

At the time of counselling students have the option to opt for ‘freeze’, ‘slide’ or ‘float’ for the choice of academic programmes in the subsequent rounds.

Freeze – It means the students are satisfied with their allotment and do not wish to take any further part in the counselling.

Float – It means the students accept the allotted seats and in case they get admission in a better/higher preference programme then they can accept it or else continue with the allotted one.

Slide – It means that students who have accepted an allotment can accept a better programme in the same institute if available in subsequent rounds.

Also read “Wish to study in IIITs? Know how to get into one !“

The Biggest Technical Fest Of Allahabad Is Here! Brace Yourselves For IIIT Allahabad’s Masterpiece Aparoksha ’18

The Largest Civil Engineering Fest Of The Country Is Here! IIT Bombay Presents The 10th Edition Of Aakaar on 17th-18th March 2018.

The Super-Rocking Cultural Fest of IIT Allahabad -‘EFFERVESCENCE’17 : An Indian Affair’ Looks Like A Grand Celebration Of Life !

A writer is simply a photographer of thoughts.
Do read my articles