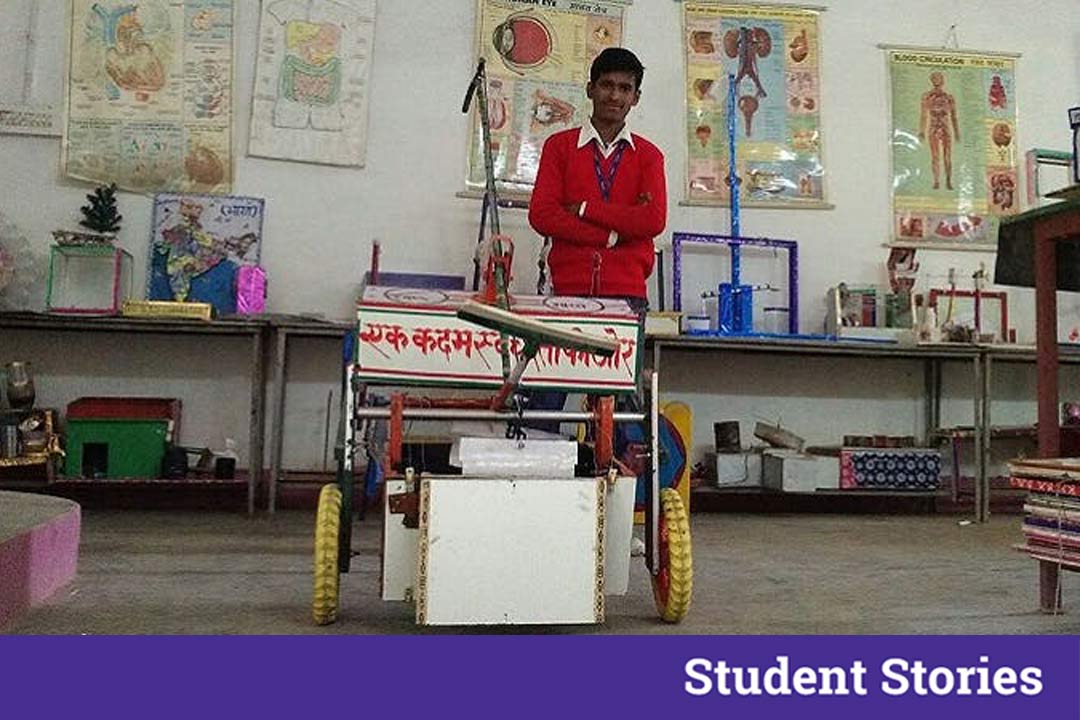 Sikanto Mandal’s early morning duties at school were a little different from that of other children who indulge in prayer and lessons. At the Jai Gurudev Sanstha School in Mathura, which provides subsidized education to underprivileged children, Sikanto and his classmates first cleaned their school premises. Sikanto is in 9th standard still aspiring to make his idea a global hit.

1. What inspired you to build a garbage carrying machine at such a tender age?

Usually, girls swept the ground and boys collected the garbage and then dumped it. I observed how many of my friends hesitated to touch and lift the garbage with their bare hands. This set me thinking and urged me to innovate something that would solve our garbage collection woes.

2. How is your device better, efficient, and unique compared to other similar products in the market?

All the other devices in the market are mechanical and are run either on battery or fuel. My cart is completely manual, light-weight, and easy to operate. I have also provided customized spaces in the cart where people collecting garbage can keep the broom, a water bottle and other waste materials they might pick on their way. A picker that aids in collecting garbage without touching it, a gripper and a handle which upon operating helps in the easy dumping of the garbage without having to completely topple the cart.

3. How and when did people start appreciating your efforts towards the environment?

First exhibited at the district level of the Inspire Awards, my garbage-collecting model won several accolades and was also selected for display at the state and national level. In 2016, I exhibited my model at the National level in Delhi as one of the three entries from Uttar Pradesh.

4. How did NIF help you built your dream on the larger scale?

NIF then helped me build a proper prototype (made of metal) of his product and market it to potential enterprises. The technology behind the mobile waste-collecting device is now transferred to Sarjan Innovators Pvt Ltd, a Gujarat-based startup. We are keen on beginning the mass production of this device soon. The Swachhta cart enables a very professional way of garbage collection with a certain ease of labor in reduced time.

5. How did you start building the machine from scratches?

I scrapped together old furniture to make the first model and tested it in school for the first time. I then exhibited his invention at the district level of the Inspire Awards, which was met with praise. Soon after I was invited to showcase his creation at the state and national level.

6. Even as a kid you think success as all oriented towards the betterment of the family. How?

If you visit the small ancestral land we have back in West Bengal; you’d see a makeshift structure without a solid roof. An old rugged blanket which serves as its ceiling is often blown away by strong wind currents. It is the only place we can call our own home. One day, I will build a pukka house where the dilapidated structure stands. My brother will no longer have to work at the factory. He will complete his B.Sc and earn his degree, and my parents won’t have to work two jobs to make ends meet.

Even the Nagar Palika garbage collection vehicle requires four sanitation workers in spades to manually pick the waste and dump it in its container. And this use of additional manpower and the risk of picking waste with bare hands or rudimentary tools can be tackled with the Swachhta cart which only requires two people to operate it. Besides, it can pick all kinds of waste.

One Man, Multiple talents! Meet the All Rounder Student And Multi-Talented Poet- Soham Senapati.
He Was The Last One Who Did Levitation Photography In Hyderabad – Meet The Amazing Photographer, Sandeep Gudala
Comment