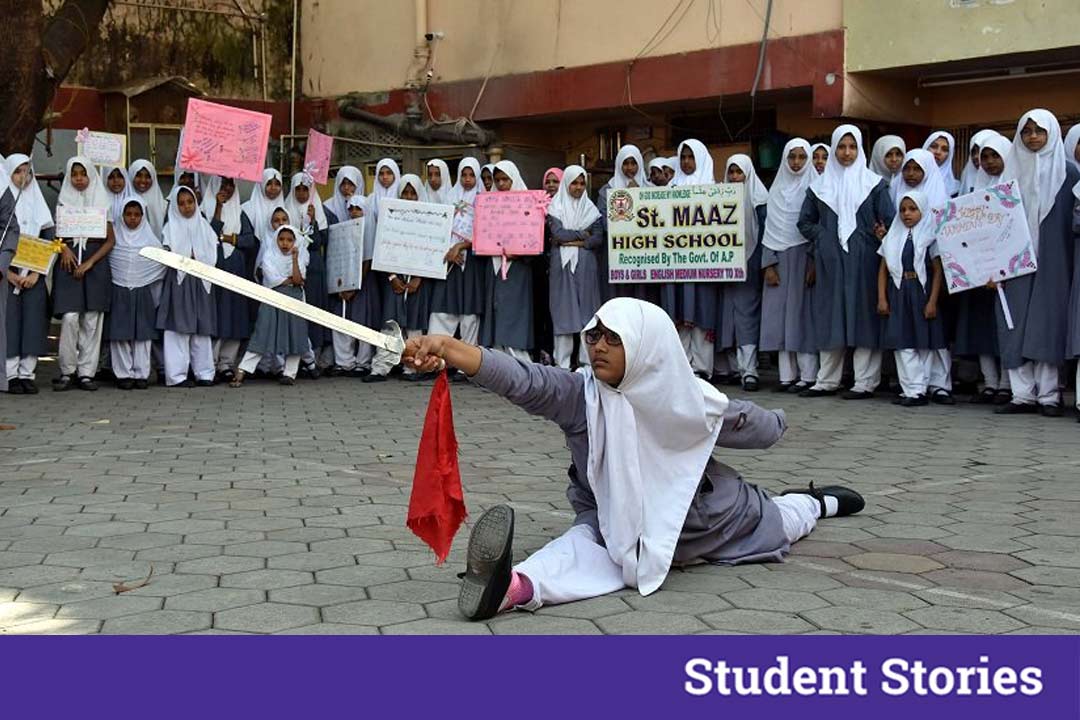 Fourteen-year-old Fareeha Tafim grew up with a lot of dreams. However, for the girl born in a conservative Muslim household, having dreams meant building castles in the air. But Fareeha’s story deserves to be written as it is about defying all norms with sheer determination and going at patriarchy with a Wushu sword. Fareeha Tafim is a well-known name now in the martial arts circles. Having won both national and international championships, she has defied many odds to make a place for herself in martial arts.

Wushu, a form of martial arts that originated in China in the 1940s, was brought to the school to teach self-defense to the girls to protect themselves from the gender-based violence that is constantly on the rise. After learning it for three years, I got very good at it and there was hardly anyone in the state who could beat me. I eventually went on to become the state champion in 2016. Despite covering myself with a veil every time I do Wushu, for me, Wushu-ing is the ultimate form of liberation.

2. What was the initial struggle you had to undergo in your desire to learn this self-defense mechanism?

It was one thing to learn Wushu as self-defense and fight girls in the school, but neither my family nor my community approved of my traveling all the way to Assam for the national championship. My mother believed that by doing this I would bring dishonor to the family. Following are the words she said, “If you show your face you will be called shameless because you will be performing in front of thousands of people”.

3. Who was your biggest support on your this journey of becoming a national champion?

Though the entire family was against me, it was my father who supported me vehemently. He was an illiterate who grew up living on the streets; hence, he wanted his child to have a chance at anything that could make me independent irrespective of my gender. With him by my side, the rest of the family had to eventually give in, albeit halfheartedly. Against all odds, I want to become a police officer so that I can protect young girls like me.

4. What was the reaction of your mother when you won National Championship?

My mother, who was unwilling to let me pursue martial arts, was very happy that I won the competition. My mother was not willing to send me because she was concerned about my safety. I am sure many young girls will now go for it as it kind of breaks the taboo around it. I look up to Mary Kom for inspiration and would want to spread the sport as much as I can.

5. What is your training routine? Do you get time after school?

I practice for three hours every day in the morning. It was my coach Wahaj who has trained me from sixth grade. I say that he is very supportive and always encouraged me to get better at it. He also says that I am one girl who has got great potential, has all the qualities to be a great fighter. Apart from this, I want to drive a gear bike, it is just a dream.

Meet The Social Bird, Fitness Freak And The Face Of Elegance Who Is Inclined To Reach Each Corner Of The World , Gurfateh Pirzada
India’s Youngest Archer, 5 year old Cherukuri Dolly Shivani Has Two World Records In Archery
Comment