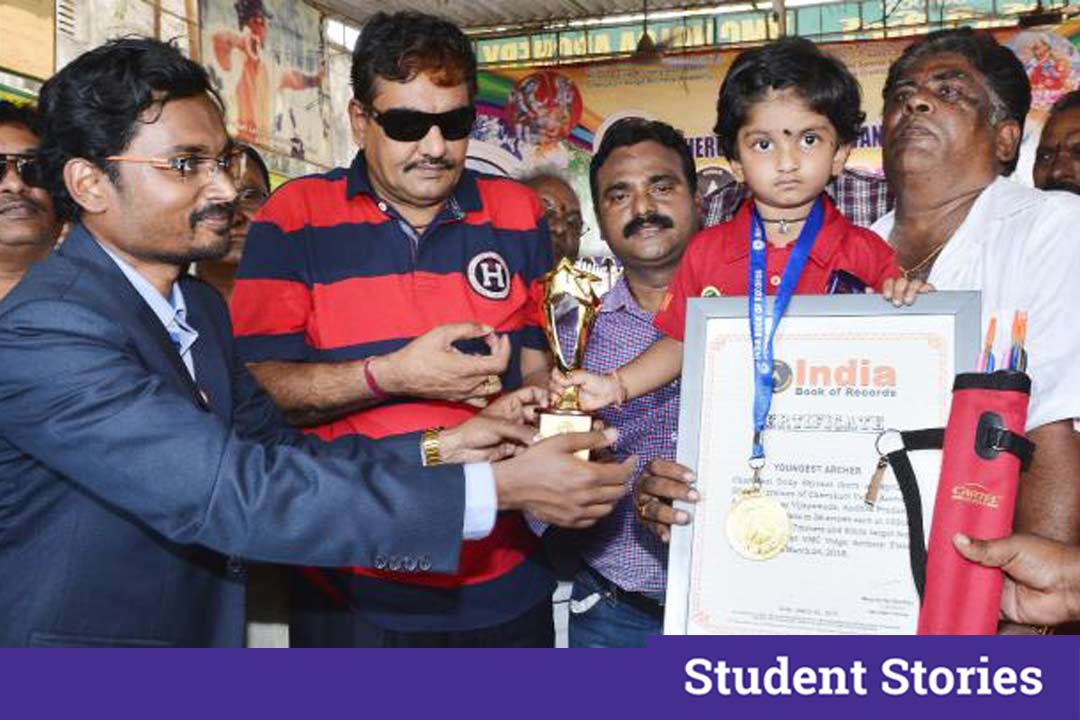 Cherukuri Dolly Shivani was in her mother’s womb when it was decided that she will be an archer. The young archer from Andhra Pradesh comes from a family of archers.  At a time when other kids her age were learning to speak and walk, she had a bow and an arrow in her hands and was taking her family legacy forward. Two years back, she became the youngest Indian to score more than 200 points, and a few days back, five-year-old Dolly entered the India Book of Records and Asia Book of Records. Speaking to her parents we received a few answers from their private lives and how Dolly’s journey began:-

1. When did you decide or Dolly decide to take up Archery instead of dolls at her age?

When we came to know that the baby was on her way we decided to mold her as an archer. The preparation was on while she was in the womb itself. When Shivani was born on April 2, 2012, she arrived amidst the bows and arrows. Her 35-month journey so far has always been with archery. Literally, she speaks, dreams, eats archery and mingles with senior archers.

2. How do you feel today when at the age of 5 your daughter is a record holder?

Today, we are very proud to see our kid making such grand advancements. We hope that by the grace of God, she will scale greater heights. She is now completely firm and professional, and listens to each and every suggestion, either from me or from her coach Chandrasekar, with full concentration.

“Standing at a distance of 10 metres, Shivani shot as many as 103 arrows in 11 minutes and 19 seconds. After a break of 30 minutes, she drew 36 arrows from 20 metres, taking five minutes and eight seconds to do so. Out of a possible 360 points, Shivani managed an impressive 290.”

3. How do you as a father see that a girl is taking up a road less traveled by due to the stereotypical notions?

Dolly was in her surrogate mother’s womb when I bought 30 tiny carbides bows designed and made in Poland. Even before she turned three, Dolly started carrying her bow-stand on her own and warming up with many disciplines; sometimes better than the senior archers. Therefore, I strongly believe that gender has nothing do with the sport you take up. I can’t express in words how happy my family is.

4. What are the two records that Dolly holds proudly at such a tender age?

Just five-years-old, my daughter set not one but two records in archery to enter the India Book of Records and the Asian Book of Records. She fired 103 arrows at a target 10 meters away in just 11 minutes and 19 seconds. For her second attempt, Shivani fired 36 arrows at a target from a distance of 20 meters in a record time of five minutes and eight seconds. She scored an impressive 290 points out of 360. She is now gearing up for the 2024 Olympics. She currently trains at The Volga Archery Academy in Vijayawada.

5. What do you hope for Dolly’s future?

Performance of Dolly was outstanding and an archer in her teenage cannot do the feet done by her It was difficult to score 250 in 20 meters event and she easily achieved it. It was a big challenge for her in this age. Dolly will be 13 when the 2024 Olympics will be held. Our target is to prepare her for the grand sporting show and we need a top class coach to teach her the advanced techniques. I want Chief Minister Chandrababu Naidu to take note of the request and do the needful. We are all very proud of her. We are very impressed.

Meet Aryaman Singh, The Child Prodigy Breaking National Records At the Age of 10

“When The Going Gets Tough, The Tough Get Going.” – Labdhi Surana, The Little Skating Player Who Is Making India Proud