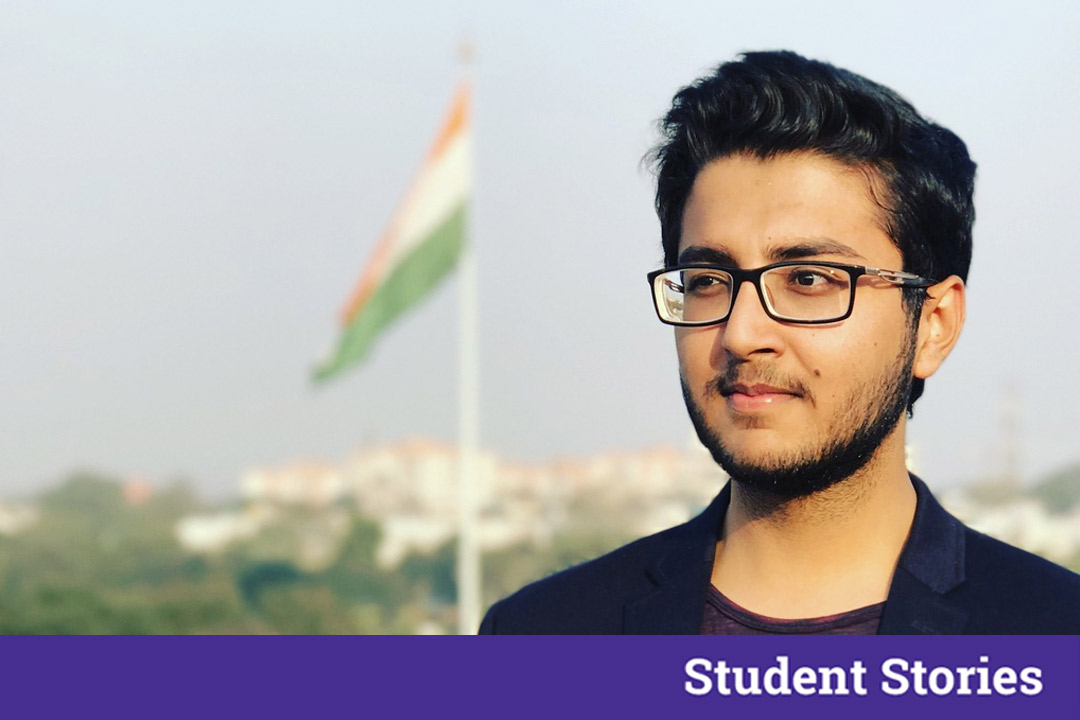 A young and passionate leader, and the founder of an inspiring page – Rising Bharat, meet Shubham Singhal, an innovator built by his own efforts and learnings who inspires a  lot of people through his work. His philosophy of leadership and ‘beyond oneself’ theory inspires many! The third-year student from Symbiosis International University, Noida visions to change the mindset from mediocre to mastery.

IN CONVERSATION WITH SHUBHAM

Say something about yourself?

I am the Founder of The Rising Bharat and Deputy Chairperson of India France Youth Forum. I am also an awardee of Top 100 Young Leaders of India and have previously worked as Growth Manager, where I helped 150+ campaigns to reach 30+ lacs. I have worked with various other organizations – Delhi Food Truck Festival, The Dais Foundation, Teach For India, Faad, and many more. At the age of 19, I was invited to Delhi University’s prestigious college, Dyal Singh as a judge in a Startup Competition.

From where do you get inspiration?

I get inspiration from every person I meet. The setbacks and challenges people have faced in their lives inspire me to rise beyond my own. In Rising Bharat, we do the same, we cover stories of people from various walks of life who have reached new horizons through their efforts. Not just one, but every person inspires me.

Would you like to say something about the campaigns that you have organized?

The best campaign or the most successful campaign was the comedy campaign. In this campaign, there was one guy who had just started as a comedian. We were the first one to discover his talent. We uploaded his performance video during our campaign and he got a wider recognition.

What is your biggest achievement?

I feel confident now because I can see myself in the eyes when I look in the mirror. Observing the growth I’ve witnessed in myself from school time to now, I feel proud of myself and this gives me immense confidence. This will perhaps be my most important accomplishment.

When I first started my career, the three startups that I worked with failed. I thought that I won’t be able to succeed. But instead of giving up, I changed my strategy and attitude. This helped me overcome the fear of failure and ultimately led me towards success.

There is one memorable moment which keeps motivating me to do more. I was invited as a delegate to a conference held in November 2015 at SRCC. In August 2017, we invited the same speaker to our event as well.  In conversation with him, I told him that I pushed myself and grew a lot after attending his conference. He was so overwhelmed by my story that he recorded my interview right there. He later posted the video on Facebook as well. This was one of the best moments of my life. Being interviewed by the mentor who motivated me felt like an accomplishment and was a deeply moving experience for me.

ALSO READ – A Law Student, Actor, Dancer and Queen of Instagram ! Meet Manvi Nautiyal Who Will Steal Your Heart With Her Every Performance !

Would you like to give any suggestion to the youngsters?

One thing that I would always suggest to everyone is to explore their own potential. We are often hesitant about experimenting and end up settling for mediocre achievements. If you don’t believe that you can do or perform something, then you won’t be able to do it.

Life can’t be limited by age, it’s our own mindset that limits us. We can imbibe something from everything and everyone. Our generation has access to the internet which gives us open access to so many things- videos, books and other sources as well. This will make us more dynamic and invigorated.

Any future plans or future goals which you would like to fulfill?

I am currently studying for CFA and I aspire to go into the field of finance.

Moreover, I would like to devote more time and attention to Rising Bharat so that we would be able to reach out to wider and more diverse audience.

To connect with Shubham,

He Was The Last One Who Did Levitation Photography In Hyderabad – Meet The Amazing Photographer, Sandeep Gudala

Sakshi Sindwani, A Fashion Blogger & YouTuber From Delhi Living Her Dreams And Styling Up With Her Creative Styling Fashion Ideas.
Meet Aayushi Yadav, Content Curator At ‘The Scribbled Stories’, Who Has Won Thousands Of Hearts With Her Magical Words!
Comment