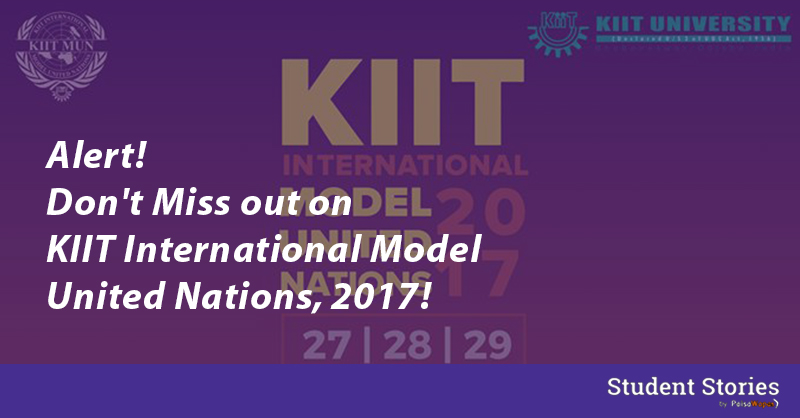 Ready for the heated up debates  ?

When hatred runs deep, fuelled by intrigues, we believe that only insight and diplomacy could row us across the mayhem.
KIIT International MUN, boons you a prospect to direct the course of the council and angle the sails of the debate towards the winds of transformation. Last year, the Grand Conference had been shaped by our allegiance and devotion. Surpassing our own meek expectations, the three day symposium concluded by setting up the very benchmarks of eminence.

This year, KIIT invites you on the journey towards the fifth edition of KIIT International Model United Nations. “With the same ideals but new foundations, we wish to uphold the grandeur once again, as we course ahead on the path that leads to the zenith in the form of 18 committees.”

We will acknowledge the role of the press in bringing cardinal issues to the vanguard with the questions that they pose, and the articles that they author.

Taking its roots from the International Syria Support Group (ISSG), International Conglomeration on Security of Syria is a special meeting that will be simulated this year.

United Nations Security Council is one of the six principle organs of the United Nations whose primary objective is – maintenance of international peace .

Delegates will be visiting all the other committees during the course of the three days of the conference, and thus will be adopting agendas simultaneously i.e. representing their allotted nation at every UN subsidiary body simulated

This committee acts  as a deterrent for nations assisting terrorist activities, providing technical/financial support and safe haven to terrorist groups and/or individuals.

Is this your first MUN?

This committee provides a forum for identifying, highlighting and developing responses to present human rights challenges  and acts as the principal focal point of human rights research, education, public information, and advocacy activities in the United Nations system.

The CSW plays a huge role in promoting women’s rights, and shaping global standards on gender equality and women empowerment.

It was set up to govern the exploration and use of outer space. The committee was tasked with reviewing international cooperation in peaceful uses of outer space, studying space-related activities that could be undertaken by the United Nations.

Intergovernmental political and military alliance which  make  decisions in order to maintain and promote democratic values and encourage cooperation.

This committee will review the current situation of the treaty, preventing the spread of nuclear weaponry and thus promoting peace and cooperation in the use of nuclear energy throughout the entire International community.

The Legal Committee focuses on general treaties and provides the framework for important treaty negotiations.

It promises to deliberate positively on of the topics concerned to Special Political and Decolonisation Committee, and carry forward the work which has been done earlier.

Its main role is to create a regulatory framework for the shipping industry that is just, effective, universally adopted, implemented worldwide.

Will deal with one of the various problems concerned to the ECOSOC and aim to bring something good into existence, for the betterment of all.

DISEC will involve itself in heated debates, strong policies and remarkable discussions regarding world peace and international security.

I’ll be focused on passing legislature that embodies the definition of health, aiming to raise voices for the betterment of the health sector in the world.

With heated up debates, this committee is set to address the human rights issues raised by the UN Human Rights Council, thereby propagating and asserting the careful application of the Universal Declaration of Human Rights.

KIIT MUN 2017 hopes to successfully simulate the ideals that UNFCCC stands for, and promises to adhere to a patterned debating structure while upholding proper policies.

Delegate and international press  application forms will be available soon

KIIT International Model United Nations 2017, hopes to welcome you to The chronicle of History as it unfolds in the fifth edition of the conference.

You may also like : KIIT University : An Overview, Placements And Why KIIT?

Alert! Jadavpur University – Overview, Rankings And Reasons For Choosing It!
Delhi University : Check Out “Colleges For Women” Under University Of Delhi
Comment