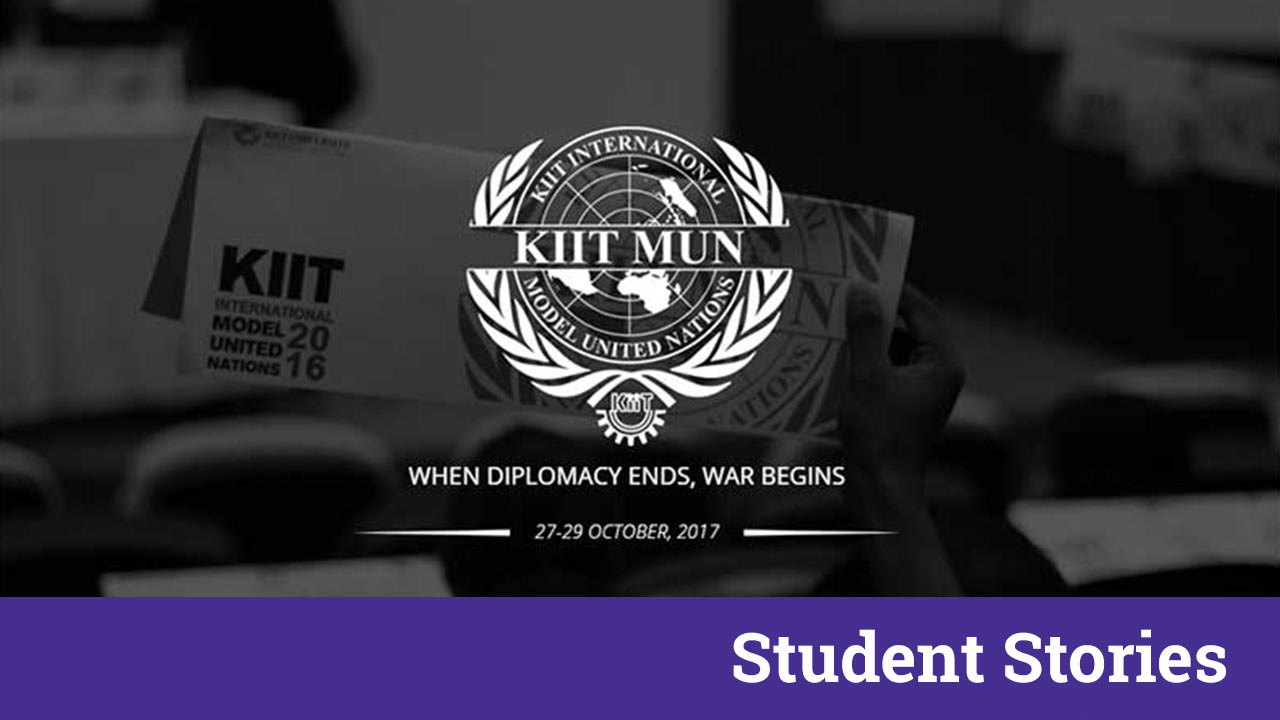 The fifth edition of the flagship event of KIIT University, KIIT International Model United Nations, is scheduled to be held from October 27 to 29, 2017. KIITMUN 2016 had been of the largest MUNs hosted in the World. With more than twenty international collaborations in the past, KIIT International MUN 2017 looks forward to a quality participation in the conference of 2017, with 18 committees hosted by the most experienced Executive Board members. Exhilarating debates and tremendous research is what constitutes the three day event, along with something to look forward to at the end of each day. With cultural events by the students, stand-up comedy by one of the most popular standup comedians – KENNY SEBASTIAN, and networking dinners KIIT International MUN is going to be a grand event everyone is looking forward to. KIITMUN has global partners as Rome MUN, TEIMUN , sponsors as Management Paradise.com, World Vision India, Naturals, India Times, Paisawapas.com, Student Stories, MensXP, Canon and more.

ICSOS will be the flagship committee (meeting) this year at KIIT International MUN, which will be simulated in form of a closed room conference, held with the permission of Syrian government and its respected authorities, where all the participants must expect rigid negotiations amidst each other until the very end of the conference.

United Nations Security Council is one of the six principle organs of the United Nations whose primary objective is- maintenance of international peace and security as well as addition of new members to UN and, also any modification to the UN charter.The Security Council consists of 15 members of which 5 are permanent and the rest 10 have non-permanent status.

AGENDA: Identifying key areas of national interest and developing a formative national policy scheme with an overview of, and under the ambit of, the various committees under the United Nations.

AGENDA: 1) The United Nations Programme of Assistance in the Teaching, Study, Dissemination and Wider Appreciation of International Law 2) Drafting of a Convention on climate change post Paris Agreement

AGENDA: 1. Strengthening accountability through enhanced transparency and measurability of the implemenration of nuclear disarmament obligations and commitments under NPT.
2. Review of the framework of operations under Article III(2) of the NPT through the Zangerr Committee.

AGENDA : The major concerns at the NATO Summit on 27 – 29 October 2017 will be to prevent global threat from terrorism. Five issues will dominate the agenda of the summit: the risks from the Middle East such as radicalization, the situation in Eastern Europe+Ukraine, the issue of enlargement, Syria, and the debate about the future nuclear strategy of the Alliance.

AGENDA: 1. International Mechanisms for Exploration, Exploitation and Utilization of the Outer Space Resources.

AGENDA: The empowerment of indigenous women

AGENDA: Reviewing the Addis Ababa agenda on Financing for Development

2. The Political Situation in Israel-Palestine territory.

AGENDA: 1. Land Use and Climate Change, with emphasis on REDD+ activities.

2. Review of Green Climate Fund and the issue of Long term climate finance

AGENDA: The necessity of military aid with special emphasis on the proliferation of weapons in East Asia.

(a) implementation of human rights instruments;

(b) Human rights questions, including alternative approaches for improving the effective enjoyment of human rights and fundamental freedoms;

(C) Comprehensive implementation of and follow-up to the Vienna Declaration and Programme of Action.”

The International Press represents the understanding, as well as the interests of the commoner in the council. The role of the press is acknowledged in bringing cardinal issues to the forefront with the questions that they pose, and the articles that they author.

The Rise Of Xpressions 2017 -The Best Management Fest In India Organized By XIMB ! Relive The Grand Experience Of A Fest Beyond Time !

Watch Out For The Ground Breaking Society Of Delhi University- RamComm Which Is Impacting Millions Of Lives Daily !
The Team Behind The Success of Eclat! The Economics Society Of Daulat Ram College Which Personifies Excellence In It’s True Sense !
Comment