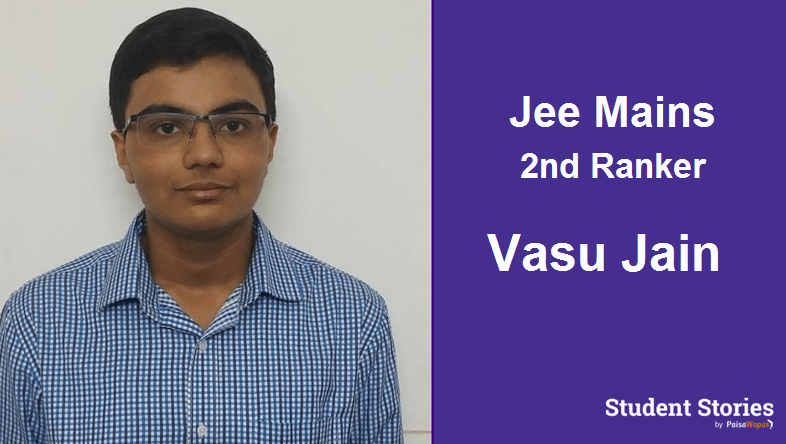 Vasu Jain, a student from Modern Convent, Barakhamba (Delhi) bagged the second position in JEE Mains 2017 of which the results were announced recently. There is no stopping here for Vasu and he has his focused eyes on the JEE Advance paper that has to be held next. Vasu has a different ideology on how he has to proceed further in life, he says “Do what interests you the most and not what others advice you to do”. According to this star boy, nobody can tell you what will suit your psyche. Vasu scored 350/360 in his JEE Main 2017 thereby securing the second position in All India Rankings.

Lets know some amazing facts about Jee Examination from Vasu :

1. When did you start preparing for the JEE Exam?

I was admitted to Vidyamandir Classes in the 9th standard itself but at that moment I didn’t pay much attention to the exam. It was recently in my 11th standard, I became serious about my preparation after completely realizing that this is only what I want to do ahead in my life.

2. What are your preparation strategies for the upcoming JEE advanced exam 2017?

There is no special technique that I follow. Also, I don’t want people to follow my technique because it might not work for them as it works for me. I believe people should follow what is better for them because everybody does not have same methods, time schedule, and sitting capacity. What is the loose point might be the strong point for someone else.

3. How much do you think mock tests help in building confidence?

Mock tests are the best practice tool that every student should undertake. Mock tests make you realize the true strength of the preparation you are doing. It enhances the ability of the student to perform in the exam. I have done a lot of Mock Tests which were given by my coaching institute.

4. Which subject do you consider as your strong area?

Mathematics, as it is my favorite subject, I feel at ease when performing the sums. I believe there is no specific area that you can concentrate and make strong in JEE. All the subjects have to be given equal importance and regular practice makes everything easy.

5. How do you tackle the stressful times during the preparation?

Everyone feels stress during such exam because of pressure as well as the expectation that your parents have from you. But, taking too much stress works against you whereas a little bit is necessary to keep you focused and motivated throughout the time period of preparation. My way to tackle my stress is taking short breaks and read the books which are entertaining to me.

My inspiration, idol, motivation mechanism everything is my parents who have worked hard on my dreams. It is they who sacrifice for us and want to see us succeed in our lives the most. So, the entire credit of whoever I am today and will be is to them. Also, my coaching class teachers too have played a very significant role in the motivational grounds.

7. What will be your message to your friends who are preparing for the exam?

Get the details of Architecture Aptitude Test (AAT), 2017 by IITs here

Is “Google” Your Dream Company? Success Secrets From Mayank Bhura Who Secured A Pre-Placement Offer From Google!
World’s Lightest Satellite Weighing Merely 64 gms Designed By An Indian Teen!! “Kalamsat” | To Be Launched By NASA
Comment