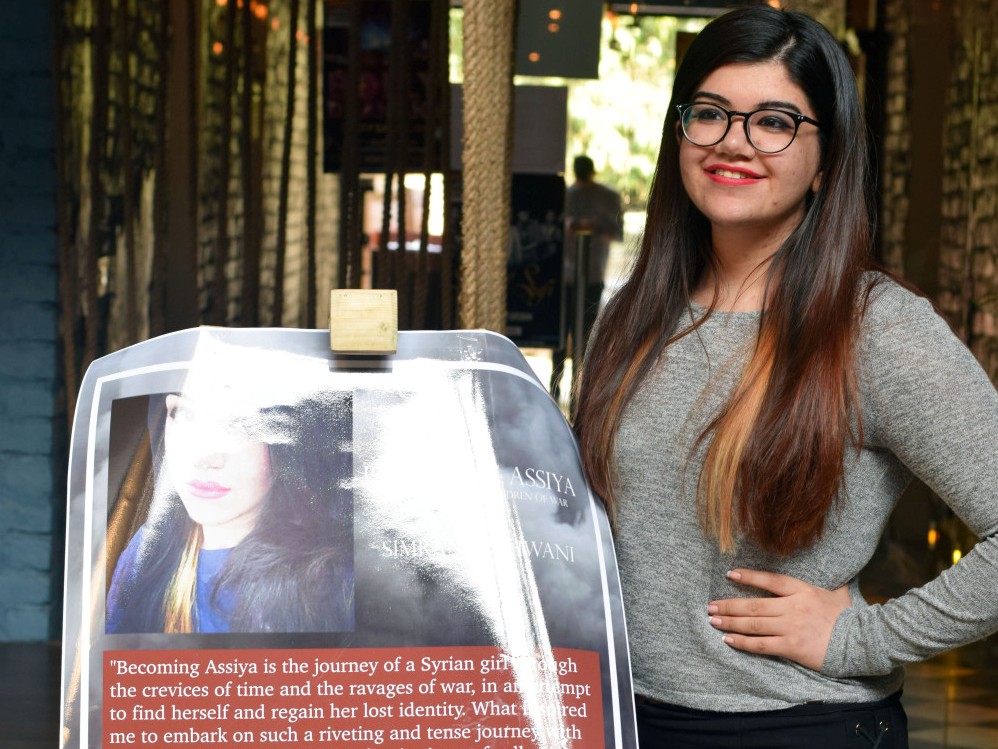 Simran Keshwani, who wrote “Becoming Assiya” recently, is an English literature student at Lady Shri Ram College for Women, Delhi University. The book is about a misplaced Syrian refugee and her journey for survival and finding herself after a violent past. Simran is also the Founder of a start-up, Born Of a Million Thoughts, which deals with on-ground Social Activism. Simran has plans to change the world, one word at a time, for words, are mirrors and swords.

1.What inspired you to write this book “Becoming Assiya”?

I think, particularly today, we stand at a very interesting crossroad in the chapter on human history. Here on, we can self-destruct with mutual divisiveness for games of gains or move on with the message of accepting one another, which seems like an easy aphorism to deliver, but at the end of the day is harder to endure than love and hate. Those two, are extreme emotions, and as humans, we are drawn to extremes. What’s harder is to levitate in the middle – and settle for acceptance. Once we learn how to look beyond barriers of religion, color and backgrounds into the common thread of being human that tie us, I think we will fall into the moderate realm of “acceptance”, which is the toughest human emotion to endure since it requires a certain balance.

2. What is “Becoming Assiya” all about?

The book is about mankind’s testing times with his own understanding of the world and his greed for petty economic gains that thrive in our capitalist world. The backdrop is the Syrian proxy war.

3. Who has acted as your mentor through the whole process of writing “Becoming Assiya”?

My entire family. They’ve supported me through thick and thin, and I think the family is the conduit to the society and to the world. It is the site where the child learns and unlearns and re-learns a lot about himself.

4. What is the process of publishing? Is it difficult to get the book published because of increased competition?

The publishing market is sadly in the dumps. I will not mince words here. It is extremely tough to capture market share without adequate funding, so if you’re on your own sans a Godfather, god forbid, the industry can be very morbid to endure. The biggest challenge is the capitalist threat that’s seeped in. Nobody cares two dimes about quality, it is about the money, blatantly put. To establish yourself as a newcomer is a hard road but once you’re there, the climb has just begun. You’ve got to constantly keep proving yourself and updating yourself, else survival here is tough.

5. How has your life changed after the book came out for the wider audience?

In a lot of ways!! The expectations are a lot higher. I don’t know if that’s a good thing or bad. I find myself doubting all the appreciation at times. I’m extremely humbled and thankful, at the same time, I’m twice as hard on myself to keep my feet firm on reality and not forget my ground.

6. Have you received any harsh criticism upon your writing? Did it affect you negatively or positively?

I heard that the book is a tough read. I think that’s what Postmodernists have been trying to achieve – when the onus of deriving meaning of a text lies entirely on the reader’s mind. That indeed makes it a tough read, because nobody will hold your hand and take you through a linear narrative. Like the crevices of the mind, like the staccatos of life, I wanted the book to reflect and throw up a lot of questions for the reader to feed on, while still keeping him hungry for more.

7. How have your parents reacted to this book and the appreciation it is receiving?

I hope they’re happy! They keep telling me I wasn’t born for the “average” and that is something I’ve widely contested because the average is the safe contour. Nothing great happens in the average zone, no fall is ever too deep from the average zone. They try telling me to tighten my grips and aspire for the higher, but I guess I’m too afraid anticipating the fall.

Also read “Arkopaul Das, a 10th standard student whose thriller novels are read around the world”

8. Will you be writing more of the books? What is on your mind for the next one?

Honestly, there’s nothing on my mind. I’ve tried working on a couple ideas, but they weren’t good enough. Maybe it is a writer’s bloc and I hope it subsides soon. Let’s just say I’m enjoying mediocrity. Let’s see where it takes me.

9. What is your message for the youth?

Keep changing. If you don’t, you’ll be outdated soon. That’s something I had to learn the hard way. Switching jobs, starting over with a hazy idea is something that does happen a lot during our 20s and that’s completely fine. Up until you’ve known failure and it’s depths, you can absolutely not spring up.

To buy the book on Amazon.

For US readers to buy the book.

If you think it’s impossible to start afresh after graduation, take a deep breath and read the story of this young film maker
Know The Story Of ‘Hera Pheri Films’ And Their Upcoming Web Series ‘What The Goat’ – By IIT Kanpur Graduates.
Comment