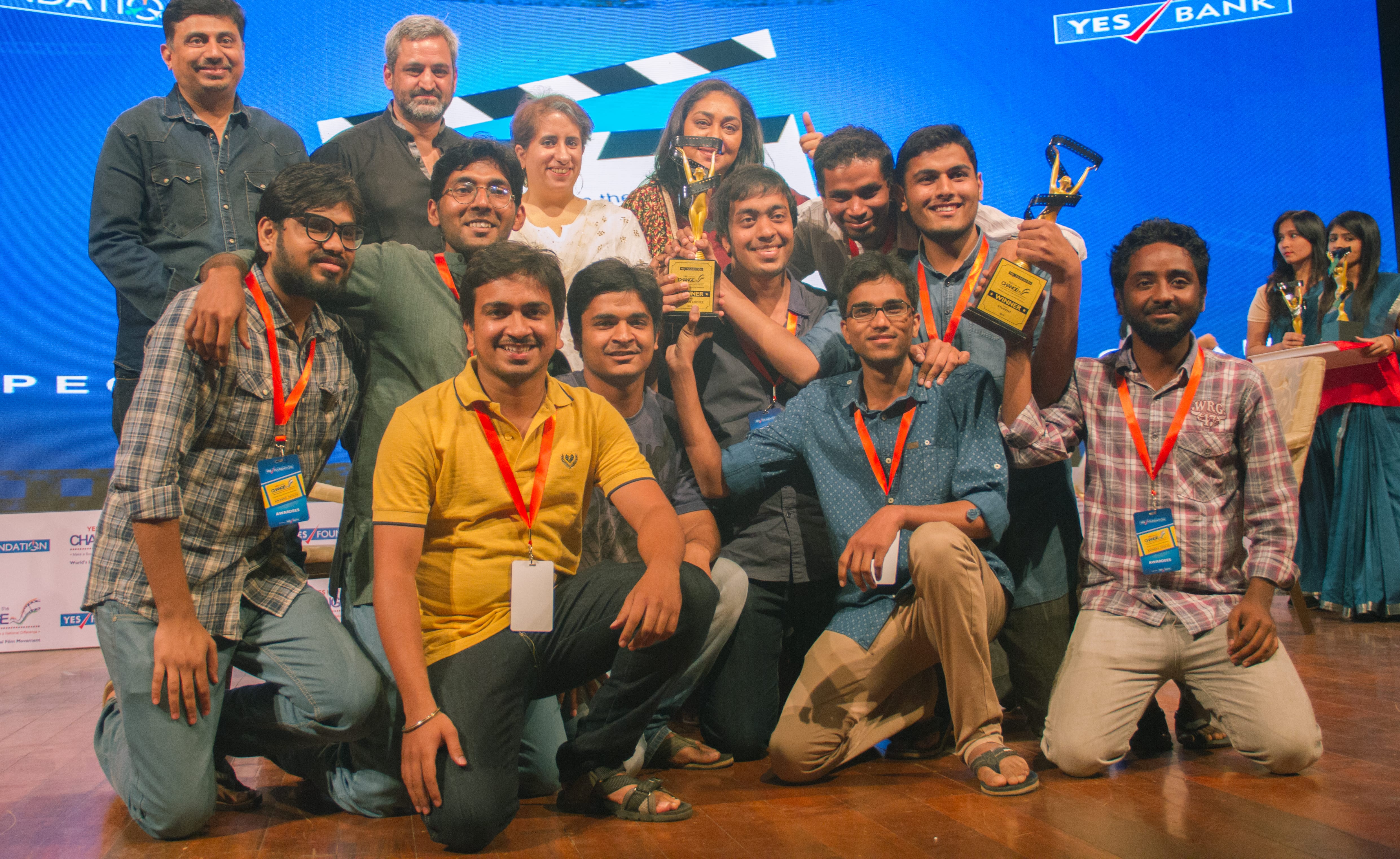 “Hera Pheri Films is the outcome of the department of Humanities and Social Science of IIT Kanpur”, says the whole team. While talking with them, they revealed many interesting things about their journey of establishing this channel on YouTube.

Hera Pheri Films have made many professional videos such as short films, web series etc. They got breakthrough in September’15 when their short film ‘Nepathya‘ received  ‘Popular Choice Award‘ in the Yash Foundation Social Film Making Challenge’. Further this film also got selected in Top 20 Deserving Films under student category. As team says, their film went under the evaluation of prominent personalities from Bollywood such as Vidya Balan, Prasoon Joshi, Vikas Bahl and Pritish Nandy etc.

While talking about the selection process of actors and musicians, team reveals that none of them really had any prior experience and any contact in film industry as such. They strongly believe in the motto of “Learning with Experience”. In case of funds as mentioned at the beginning, Hera Pheri Film team believes that “if you make quality content, fund flows from all directions”.

Currently team is working on their upcoming web series called ‘What The Goat’ which is based on the startup  ecosystem in India. They also shared their plan regarding making feature length film in 2019.

In the conversation with the team…

Q1. So how did Hera Pheri films emerge out? Tell us about the journey.

It all started when 2 of the co-founders Aditya and Mohit took a course at IIT Kanpur titled “Introduction to Video Making”. The video assignments were highly appreciated by course instructor Prof. Satyaki Roy and he pushed them to pursue film-making post course completion as well. Vishal and Navin (he is one year senior to Aditya, vishal and mohit), who had previously worked with Aditya in Dramatics Club joined during these video assignments. During the summers of 2015, they started working on a short film which eventually evolved into a web series “ Raavayna”. This is when Anushank (one year junior to Aditya, Mohit and Vishal), who had worked previously with Aditya joined as the DOP. Making a 4-episode web-series granted the team recognition and confidence which led them to experimenting and making different genres of videos ranging from thought experiments, short films to advertisements. The big break came when the team got an opportunity to make a promotional video for Start Up Masterclass, an event of IITK alumni association Bangalore Chapter. The video was widely appreciated and earned recognition in the Alumni groups.They also made a 42 minute film ‘Gatthar’ during the Winter 2016, which is yet to be released but was a significant step in their journey towards film making. Here they met their 6th member, another junior, Kush who worked as an Assistant Director.

Q2. Brief us about your online web series ‘What the Goat’’? Tell us about the team.

“What The Goat” is about the glitches of our startup world. It’s a story of four small townees with big dreams, trying to make their idea one in a million in the startup hub of India, Bangalore, and that is the reason that a lot of work has been done on character development, giving each one a unique charisma and reason to get a break into the startup world. Also, the web series got a lot of key insights from long time startup techies Mr. Ashish Sinha and Mr. Bal Krishn Birla with a lot of real life experiences. These technical nuances were incorporated aptly in the script by Aditya, who has also directed the series. The main cast includes theatre actress from Mumbai, Natasha Azad, and IIT Kanpur dramatics club alumni, Sulabh tiwari, Navin Lalwani and Vishal. A very experienced theatre personality, Sachin Malvi, was the Art and Casting Director. Mohit Mahore played the role of Sound Recorder, Sound Designer and Editor of the web-series. Anushank and Kush, still in their final year of college, continued their previous roles as Director of Photography and Assistant Director respectively.  Professional makeup artist and costume designer, Shivika was roped in to give an overall texture to the characters’ look according to the requirements of the scene. Monica SK bore the responsibility of  Set Decoration and Debangana Roy designed graphics for the web-series.. Music was composed by Rohit Patnala. We also had help from IITK’s third year students, Swapnil Kumar and Arjit Katare who worked as Production Coordinators. So this is the team!

It goes back to when we were working in college campus on different projects. Initially, We had no budgets at all and worked on minimum of equipment and props. Back then we had shot a whole web series on a budget of Rs. 5000. Lately in campus, we won a film making grant from yes foundation social film making challenge and then we started working on our inventory. But as things progressed, we had decent amount of budget to shoot in Bangalore but still limited. So, it was an immense learning experience for us. But we knew that just fitting things into budget alone won’t work as long as we don’t have the content that is engaging and enriching at the same time. So, we worked hard on the content for the series. From shooting round the clock with empty stomach to running 12 hours behind the schedule, there were many challenges we faced .

Q4. According to you, what is the best thing in your videos that attracts viewers the most? What kind of themes your videos are based on?

The freshness of  the content seems like a factor which attracts today’s audience.Our characters are never polished, they are always from small towns as most of the team is, and hence the conversation and motivations of characters are very new to online content. Story plays most important role in our scripts contrary to the character centric culture of contemporary web series. In genre, we have a big range as we appreciate a range of films. But subtle and satirical comedy are the genre we like most for an episode based production. But we like to experiment with themes based on the length and content of the production.

Q5. How was the struggle at the beginning? What was your primary goal?

The primary goal was that even if a single person watches our content he should feel unique about it. This is quite evident in some 30 odd videos that are available on our channel. None of the video tries to cross the line of desperation for views. The genre of content is quite different from the kind of videos that get viral these days on YouTube.

Q6. Do you feel the presence of competition on platforms like YouTube? What are the other competitions you are facing apart from that?

No, we feel contrary to that. The online space is big and the audience is increasing everyday. We cannot meet everyone’s expectation in one project even if we want to and hence it is very necessary that other content creators exist to keep the audience engaged online. Every production house/ YouTube channel has its own taste which creates a space of its own on the online platform. So there is no competition in terms of taking away someone’s audience but the competition of making good content is always there and its very challenging though motivating. Respect for fellow filmmakers and their content is something what we think nurture everyone in this industry

Q7. What are the weekly/ monthly targets  you have to take this web series ahead?

We count our success in terms of the appreciations that we receive. However, to get appreciated you need to reach audience base. Currently we are planning to release our first episode on 11th April and subsequent ones biweekly. This would be a 2 – 3 months release project altogether. Since the content has come out extremely well, by the end of it we are quite confident of hitting 2 million views on YouTube.

Q8. How are you going to promote this web series? What are your other plans about it?

The first promotion value comes by the IIT tag. Because ultimately this web series is made by IIT Kanpur students and alumni, though a newbie in the market with only college experience, but not keeping the production value and content one step lower to professionalism. So first we are targeting the IIT Kanpur junta and other IIT circles, and since the content is youth oriented with punches appreciated by intelligent audience, we are also targeting other college students or job goers. We have also made memes from our characters, which we will use on social media for the promotion of episodes. Also, we have thought of merchandise through comment, posts.

Q9. Do you feel Web is the best source to pass the message to the masses?

There are multiple platforms for promoting a message, Cinema still being the most prominent one. But in recent times, the enhancement of technology, smartphones have resulted in the expansion of internet to all corners of the world. This has given due inclinations to the most emerging market like YouTube channels or Facebook videos, going viral in few seconds. So online content in the format of Web Series is definitely a better, if not best, medium to tell a story without having the trouble of certification. Because if someone wants to watch a particular content, he/she shall be entitled to enjoy it without cuts or interference. The youth is bored of TV daily soaps and want some content that feels fresh, and this is what we have tried by making this web series “What the Goat”.

What the goat at NEXTBIGWHAT.TV by Hera Pheri films youtube

Simran Keshwani, a 20 year old, depicts the life of Syrian refugee through her novel “Becoming Assiya”
A 20 year old And An International Badminton Player Who Represented India At Asian Games, 2012 – Akanshi Baliyan
Comment