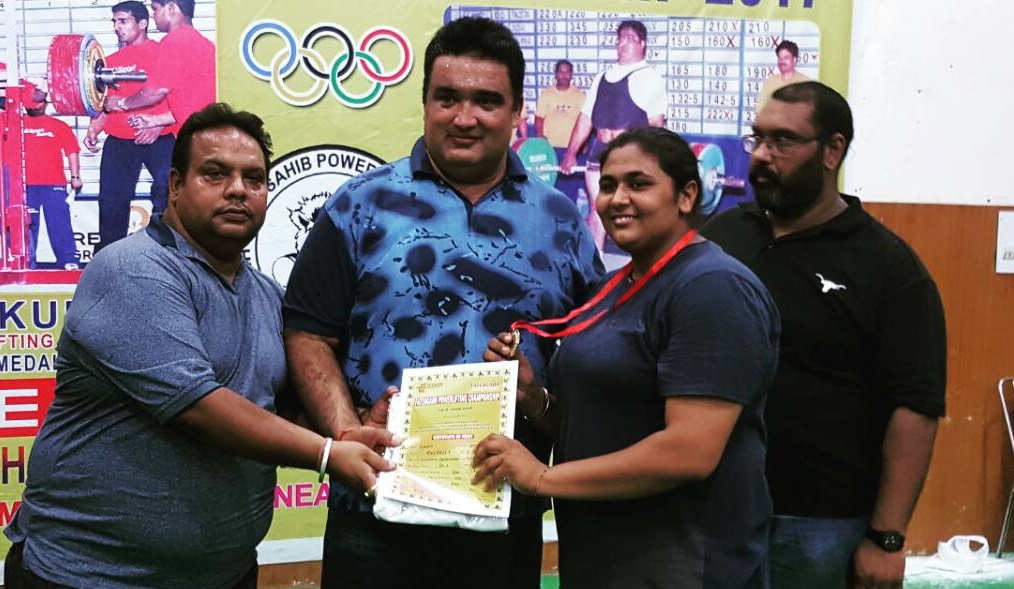 Meet Rajpreet Kaur, Winner of the title ‘Best Power Lifter’ and ‘Strong woman of Punjab 2015’ in the Inter-College Weightlifting and Powerlifting Championship of Panjab University, Chandigarh, a 22-year-old  student of BA final year at Government College for Girls, Ferozepur Road, who actually wanted to have a career in Kabaddi.

During three years of college, weightlifting and powerlifting has become Rajpreet’s passion, and now he wants to excel in this field only. “I want to reach the highest level in this sport. I also want this event to be included in Olympics,” said Rajpreet. When asked about her feeling after winning the title of ‘Best Power Lifter,’ she says:”I believe in putting 100% efforts with full dedication. I was sure about winning this title, as true dedication always pays off.”

Rajpreet gives the credit of her victory to coach Sushil Kumar, Bheem of Punjab and moreover the senior Asian Champion.

“I admired him a lot and always  want to become like him. To me, he is my strength and supporting pillar through out the journey,” quoted Rajpreet.

In conversation with Rajpreet Kaur :

Ques1: What did you aspire to be since your childhood? What were your goals as a student?

Ques2 : You are a true inspiration to millions of youth today. When and how did powerlifting happen to you?

A friend of mine Sandeep Kaur, who won the title of ‘Strongest Girl‘ in the open “Senior State Weightlifting and Powerlifting Championship” was an excellent performer. I was highly encouraged and helped by her.

Ques 3: Taking a sport not meant for girls, according to the Indian traditions, it would have been very challenging and difficult for you?

When I started, I faced lots of problem. Being from a traditional family and a village near Alamgir sahib ,weight lifting and power lifting was not meant for girls. People used to criticize and they used to question “why you need to play such a sport? what is its need?”. Moreover there were no gyms for girls too. But at the end when I started achieving my goals, people started recognizing me and appreciate my efforts.

Ques 4: Who was the biggest support/motivation in your successful journey so far?

My inspiration to get in the powerlifting was my coach, Sushil Kumar. He is the Bheem of the Punjab and moreover the senior Asian Champion. I always wanted to be like him. He supported me through out  the journey.

Ques 5: What would be your message for the aspiring youth of today?

For the  youth of today, I must say nothing is impossible even the word impossible says ‘I am possible’. But the thing is your efforts matter a lot. If you decided to do something then go for it, never stop. Achieve your Goals and fulfill your Dreams.

Also read “You Will Be Mesmerized With The Story Of This First Indian Female Wrestler To Win At Olympics, Padma Shri Sakshi Malik“

He Deserves Every Inch Of Respect For His Enormous Courage | A Physically Disabled Yet Abled “National Level Skater”
Don’t You Just Love Cricket? Know How This 15 year old Scored 1000 Runs off 323 Balls | Pranav Dhanawade
Comment