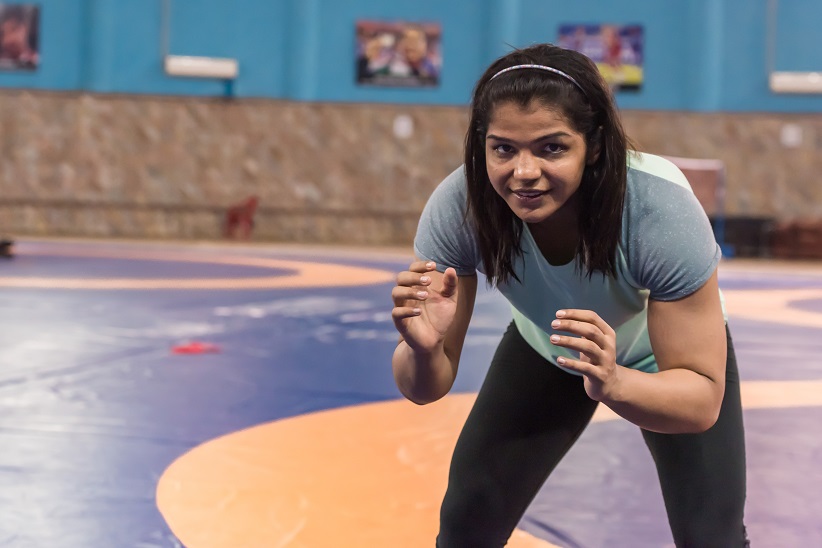 Meet Sakshi Malik, the well known Indian wrestler and also the first Indian female freestyle wrestler to win a medal at the Olympics and the fourth female Olympic medalist from the country. Born on 3rd  September 1992, Sakshi captured the bronze medal in the 58-kg category of Women’s Freestyle Wrestling in the Rio summer olympics 2016. It was probably the first medal of India in the 2016 Summer Olympics and Sakshi Malik was the one to do it for the country.

Sakshi’s passion and dedication reflects from the laurels she has brought up for the country. Sakshi pitched her career as a successful professional wrestler in the year 2010 by tasting victory at the Junior level competitions. She won a Bronze at the 2010 Junior World Championships in the 59-kg category. In 2014, Sakshi  came to the international limelight after winning the Gold at the Dave Schultz International Wrestling Tournament in 60-kg category. She also won the silver medal in the 2014 Commonwealth Games in Glasgow, winning her quaterfinal about by a 4-0 margin. At the 2015 Senior Asian Wrestling Championships in Doha,Qatar Sakshi bagged a Bronze medal. She also turned the tables in the Spanish Grand Prix in 2016 in the 60 kg category.

Sakshi has completed a master’s degree in physical education from Maharshi Dayanand University, Rohtak. In September 2016, she was appointed as the university’s wrestling director. Currently employed with Indian Railways in the commercial department of its Delhi division, in the Northern Railway zone, she was promoted from senior clerk to gazetted officer rank after her achievement at the 2016 Rio olympics.

Being awarded with the Rajiv Gandhi Khel Ratna award (2016) and Padma Shri (2017) Sakshi preaches hardwork and determination and marks it important  for attaining success in one’s life.

In conversation with Sakshi Malik:

Q: What did you aspire to be since your childhood? What were your goals as a student?

I have always wanted to be a sportsperson, when I decided to take up sports, wrestling was my first choice as my grandfather Badhlu Ram was also a wrestler. He would always  narrate stories of wrestling and dangals which had me intrigued and interested in the sport. My goals were to maintain a perfect balance between my academic life and my wrestling career.

Q: You are a true inspiration to millions of youth today. When and how did wrestling happen to you?

I always admired by grandfather who was also a wrestler and developed a passion towards the sport. I was twelve when I started to train, and till date I believe that it was the best decision I ever made. I started my training under Ishwar Dahiya, at an akhara in Chhotu Ram Stadium, Rohtak.

Q: Tell us about your practice and grooming during the initial days of your learning.

I would train early mornings and then attend school after which I would go for practice and return for tuition. I had to learn how to maintain the balance between my passion and my academics. I had promised my mother that I would not let wrestling affect my academics in any manner, so I worked very hard to excel in both the fields.

Q: Taking a sport not meant for girls, according to the Indian tradition especially in Haryana, would have been very challenging and difficult for you?

Like every sport, wrestling taught me that nothing can be achieved without the effort and the hard work. There are absolutely no short cuts in sport or in life in general. The immense support I received from my family and friends helped ease the journey through all the challenges.

Q: Who was the biggest support/motivation in your successful journey so far?

My family played a huge role in making me who I am today. Their love and support helped me bring the medal home. I have had the privilege of having great friends and guides along the way such as Sushil Kumar and Yogeshwar Dutt who are also my role models.

Q: How wrestling went on during your student life? How did you keep up with your practice along with your studies?

I promised my mother I would never compromise on my studies and worked extra hard to stay at par with my wrestling and academics. My aim was to excel in both fields.

Q: Tell us something about your daily fitness routine.

I usually practice twice a day but mainly focus on my skill set. I sometimes gym twice a day but I don’t believe in using too much equipment in the gym but I prefer learning and practice.

Q: Becoming the first female Indian wrestler bagging a medal in Olympics how does it feels?

I feel like I have given back to the country as a daughter of the nation and hope that all parents provide their children with the basic support and encourage them to achieve their dreams. I am glad that this victory has brought about a change in the mind-set of the people who downplayed the power of women. It just reiterates the fact that women can be anything, do anything.

Q: How did life change after getting a worldwide recognition through your innumerable achievements?

Life has completely changed post the medal. People know me now; I get stopped at airports for a quick selfie session, people invite me to prestigious occasions and recognize my efforts as a female wrestler from Haryana. I also had to get used to seeing my face on newspapers, television and hoardings on a regular basis – not that I am complaining at all.

Q: What would be your message for the aspiring youth of today?

There is no substitute for hard work and you must never give up on your dreams, no matter what challenges are faced. Head out, chase it and believe me it will be the most satisfying feeling once you achieve it.