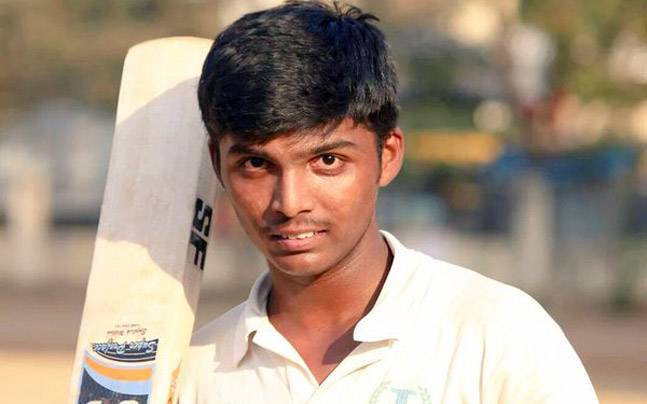 Pranav Dhanawade’s 1009 off 323 balls that pushed the reaches of cricketing imagination to new horizons. Not to forget the dimensions of the odd-shaped venue, the utter competition and the 22 catches and three stumpings that the 15-year-old survived. He is an Indian schoolboy cricketer from Kalyan, Maharashtra. Batting in one inning, stretching over 4 and 5 January 2016, he became the first person to score more than 1,000 runs in one innings in an officially recognized match.

In conversation with Pranav Dhanawade :

1.When did you start playing cricket?

It was at the age of  6  when I started playing cricket. I have worked hard since my interest grew in the game. It was with the support of people around me and seeing the game of the legend himself “Sachin Tendulkar” that I was able to make the record.

2.Who are your inspiration and a constant source of motivation?

I try to learn from every senior player of mine. But, the motivational and inspirational to me is Sir Sachin Tendulkar and Ajinkya Rahane. I love the way they play and one day I just want to play like them. They are not only good players but humble beings as well.

3.Which are the five best achievements of yours till date?

Haha! There are many things that I still want to achieve in my life. As it’s just a start and the record I have achieved is a result of my dedication towards the game. This is the first achievement. I am looking forward to achieving more in my life.

4.What has been your best top three scores according to you?

Before the record, the best score was done in the tournament held at Thane, I scored 170 in 3 matches and got best batsman award. After this, I scored a century in a match, held in Mumbai. I still want to score more of course and make everybody proud.

5.How much do you think your life had changed after so much success?

Ohh yes!! there are many changes after the record. The people started knowing me throughout the world. Especially talking about the social sites I got 1000 requests which were really shocking as I was not skinny. The reactions of people while roaming or playing it was sometimes the motivation for me. I shall keep practicing more and more and not disappoint the people supporting me.

6. What has been your practice schedule through the years?

I practice early in the morning around 5 AM. I start my coaching and after that in the evening around 4 PM, I follow this again. Recently, I have started gyming so it’s very busy schedule whole day.

7. As a budding cricketer, your life is much like a teenager or do you have to omit yourself from eating certain foods?

Yes, I have to be on a specific diet plan. It is very important for a sportsperson to remain fit. The right kind of food and exercise keeps us energized, improves our stamina and thereby improves the entire game. The flexibility in the muscles is very important to get hold of the ball.

8. How do your parents feel about the success you have achieved?

They are very satisfied that I have made this record. As my dad’s dedication towards the game was since he played cricket in his teenage. He is very happy and mom too with all the hard work, result and enlightening response I have received so far. They support me in every up and down of my life.

9.What is your message for the youth?

As I am a youth of the country, I just want to tell that work hard and the results are for sure to come your way. This is the only key to success. And, yes, also to be fit as we don’t only need a clean India but also a healthy India which will take our nation to the highest peak.

Head Held High! She Serves As An Idol To Many. “Best Power Lifter Of Punjab” | Rajpreet Kaur
This Will Change Your Belief In Sports. Archery Resides Within Her Soul | Meet Rhea Nair
Comment