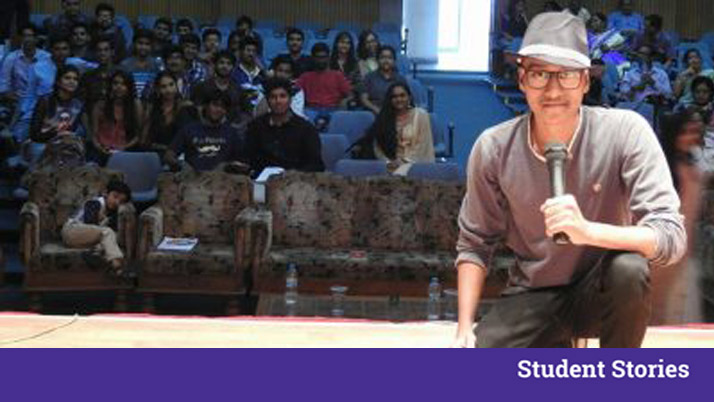 Yash Choudhary, a stand up comedian who runs the comedy scene at Nagpur – organizing open mic comedy shows. He is one of the only four comics in Central India.

Once we see his stand-ups we will indeed be willing to enquire about his talents and once we learn about his struggles one would definitely be extremely inspired by his life. He is also associated with Nagpur’s prime stand-up comedy group Nagpur Komedians  He always believed that “no matter how dark it gets the sun will rise again”. Let’s know more about this dazzling and inspiring performer.

Let us catch up with Yash as he reveals the truth behind comedy.

How does it feel being the city’s first stand-up comedian group?

To be honest, it feels lonely. That’s why I decided to build a scene in the city so that the art will spread and there will be more comics in the city.

What gave you guys the idea of forming a comedy group ? Is there anyone who has influenced you?

Like I said before. one man cannot build a scene. Hence we formed a group and tried to get connected to as many people as possible. Raouf Gangjee, the founder of the Komedians has been a great support to the scene.

Do you write your own routines or you directly perform onstage?

I believe comedy is 70% writing 20% performing 10% improvising. So I write jokes again and again to get the phrasing right before I go on stage to perform.

What is the difference between trying to write jokes and developing stand up comedy material?

A joke can come out of mere conversations or stories. But stand up material comes from experience. You cannot provide a good insight to something that you haven’t experienced in your life.

How do you deal with hecklers? Aren’t hecklers helpful for the show?

Hecklers are very interesting. I never had any problem with hecklers. I have always been Sharp tongued. So it’s easy for me to handle them but sometimes some young comics can’t.

What are the secrets in telling everyday jokes in order to get the biggest laugh?

Just be yourself. Have your own style. A simple fact can be presented funny, if delivery is unique.

What are the biggest mistakes that comedians make?

Ask senior comedians to review their performances. Don’t get me wrong. But once a senior comic told me this. ” you should know what your performance was like.” Don’t ask others or try to get their approval. Your audience is the best judge.

Have you faced any struggles to establish yourself to this level?

Haha,many. I mean who doesn’t have to face struggles? There will always be some opposition to your idea and approach. Struggles in a tier 2 city like Nagpur are on a new level. Most of the people didn’t even know the concept or open mic. I had to first educate the Venue owners about stand up before convincing them for Open mics. There were some copy cats too who tried to do open mics but their execution was a disaster. That made other venue owners afraid of such activity. There were some people who thought They owned the Copyright of comedy in city so they even tried to bully me threaten me but it never bothered me I laughed and continue to work towards my goal and I will make It happen.

Tell us about the achievements of your group !

We are the First Stand Up group of our city. We are known as the group which runs stand up scene in central India. We are the first local group to produce Full fledged auditorium show Nagpur.

There are a lot of them but these two are very special ones!  First one was when the first open mic that happened under Nagpur Komedians- the venue was jam packed there were 100 people in a venue that can hold only 60. People were standing, some were sitting on the floor excited and… The sound system failed…yes.. Then I improvised and carried the show without a mic. And guess what? The audience loved it anyway. I always heard “show must go on” that was the day I applied it. Second one was in August. when a big comic came to Nagpur for an auditorium show and I was asked to open for him. When I reached the venue and met him I got to know that he actually knew me already. He said “I have heard of you.” and insisted “you should open for me”. getting appreciated from a senior comic is a different feeling indeed!

Is there any message you would like to give to all aspiring young comedians out there?

Don’t compromise with your studies. You will be a better comic and a person if you study and complete your degree. It improves your thinking ability and gives you experience and comedy comes from experience. Other than that keep writing too. Spend 15 mins on writing everyday.

Vilas Nayak-Asia’s Fastest Speed Painter, The Finalist Of India’s Got Talent Season 3 And Winner Of ‘EC Live Quotient Most Innovative Act Award’ 2012!
A Perfect Gymming Freak And Fitness Model Of Team JERAI, MuscleBlaze And Reebok. Meet Ranjeet Singh, One From The Top 5 of Mr. World
Comment