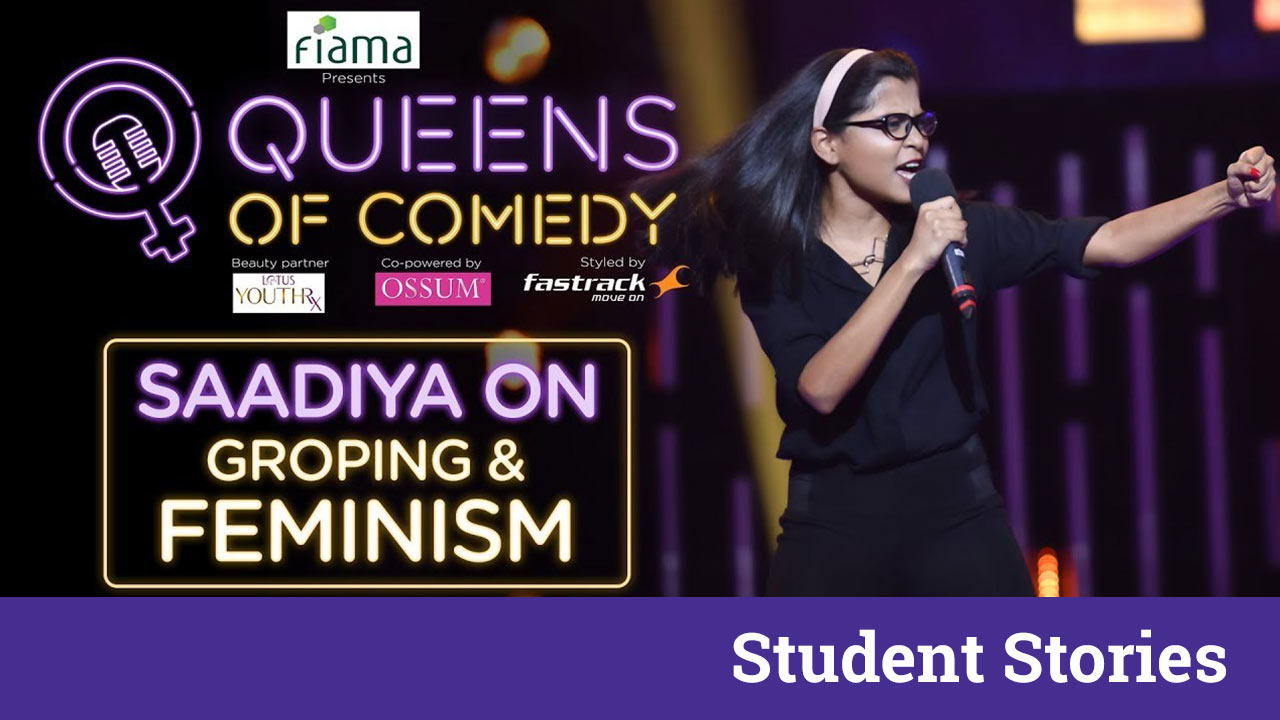 “Laughter is the best medicine” is a saying which is popular amongst all of us. Most of us would always come across people who are fond of jokes. It can be claimed that leaving aside the few odd individuals, all of us do like humour and love to be surrounded by humorous people.

“Today you are You, that is truer than true. There is no one alive who is Youer than You.”  is a quote by Dr.Seus and is something that the charming comedian Saadiya firmly believes  about her profession. Her journey from being  an entertainer to her family and friends to becoming a sensational comedian for everybody was not that easy. Combining thoughts, ideas and humour to generate a phenomenal performance involves a lot of hardwork. Let’s explore her journey in the interview down below.

Let us know about her profession and life through a short little conversation :

-When did you discover the comedian in you?

I guess it was the accumulation of various things that led me to become a comedian. I was, still am actually, a bit of a loner and just being by yourself in your own world sort of opens up your imagination.  And added to that is my history with theater, I just wanted to be on stage more often and stand up was an interesting area to explore where I was 100% my own boss.

-How did you get to know about the TLC India Queens of comedy?

A friend of mine saw the ad online and called me up. She also made sure that I sent my audition. Because honestly at that point I didn’t think I’d even make to top 30. So, thank God for friends that force you to do things.

-How do you manage to make your each performance so attractive?

I don’t know if they’re as attractive as you make them seem! Hahahaa! But I guess the influence of theater  plays a part in this. I mean, my sets are quite theatrical with a lot of movements and narrations. All I know is I am irreversibly and head over heels in love with being on stage and just having the privilege of being able to do what I do makes me want to put out a good show. Again, sometimes I kill, sometimes I bomb but the effort is equal for every performance be it comedy, acting or dance.

ALSO READ ‘GHALIB IN JAIL’, ‘LORD RAM IN COURT’- His Masterpieces Are Ruling Over Social Media ! Meet Gaurav Tripathi- A Writer Beyond Times

-Was it a challenge for you to manage with the environment and other contestants of TLC India Queen of Comedy?

The biggest challenge was coming up with good content within a span of a few days. But if anyone made it easy, it was the other contestants (more like other QUEENS). I’m so glad I got to meet such incredibly gifted, hilarious and wonderful women. The whole experience was amazing but it would have been nothing without them. We helped each other get through the stressful days and now that I look back those moments really are what will stay with me for a long, long time.

Oh yeah!! But I think it’s pretty normal to have a little bit of nervousness before you go onstage. Weirdly, nervousness is part of the package. It’s like a milder version of bungee jumping. It’s scary but it’s also fun. At least you wont die trying to make people laugh.

-Are your jokes inspired by your day to day life incidents?

Mostly, yes. Anything and everything, good or bad that happens can be funny if you just give it enough time. I’m a firm believer of “laugh at everything” And your life experiences are personal and true which is what makes it funny!

-What are your other hobbies, personally what kind of stories do you love reading?

I have a little too many hobbies for my own good! I love dancing, working out, reading, mostly fiction. I just cant get myself to read non-fiction. I sketch sometimes, pretty mediocre stuff only, but I enjoy it nonetheless. I absolutely LOVE watching things, be it movies, videos, anime. Sometimes I sit and watch cringe worthy television soaps with my mum. (Mostly for content but sometimes the sheer mindlessness of these shows are quite entertaining in their own right). I love doing things, like crafts and stuff. I also spend an obnoxious amount of time with my pets.

-What are your future plans?

Continue with acting and stand up. Venture into videos. Create more things. Hopefully it will pay off.

-Would you like to say anything about your increasing popularity, like there is a lot of competition right! So it is tough for one to gain such importance at the very beginning. So what do you feel about it?

Hahahaha! You’re being very kind to me. I’m honestly not THAT popular!  Or at least not as famous as I’d like to be someday. But that’s the goal and the focus currently is to get there. So, right now I’m not even thinking of popularity because I really don’t think I’m that big a deal yet. There’s still SO MUCH to learn, to do and grow.

-Tell us something about your life after gaining such popularity?

Everything is pretty much the same. Except I’m performing more, writing more, I’ve become a tad bit serious and I get really nice messages from strangers. But besides that life hasn’t changed drastically or anything.

-What will you advise to the youths aspiring to be in this field?

As generic as it sounds, the only thing I can say is you do you and keep working on yourself and your craft. And don’t be an asshole. It’s easier than writing comedy. Not being an asshole, that is. And this applies to any field.And I’d like to tell you to devote all your time and energy to your craft but that would be quite irresponsible because luckily I have the privilege to chase my dreams. A lot of people don’t have that. So all I can say is try to devote as much as you can to your craft. That’s my personal motto at least, because worst case scenario: I’ll at least die with the satisfaction of knowing that I spent my life doing what I loved and believed.

Performance Of A Lifetime By Farhan Akhtar At The Biggest Management Fest Of All Times- Xpressions 2017 !
Poetry That Leaves You Mesmerised! Meet Cipun Mishra Who’s Painting The World Red With His Wonderful Poetry !
Comment