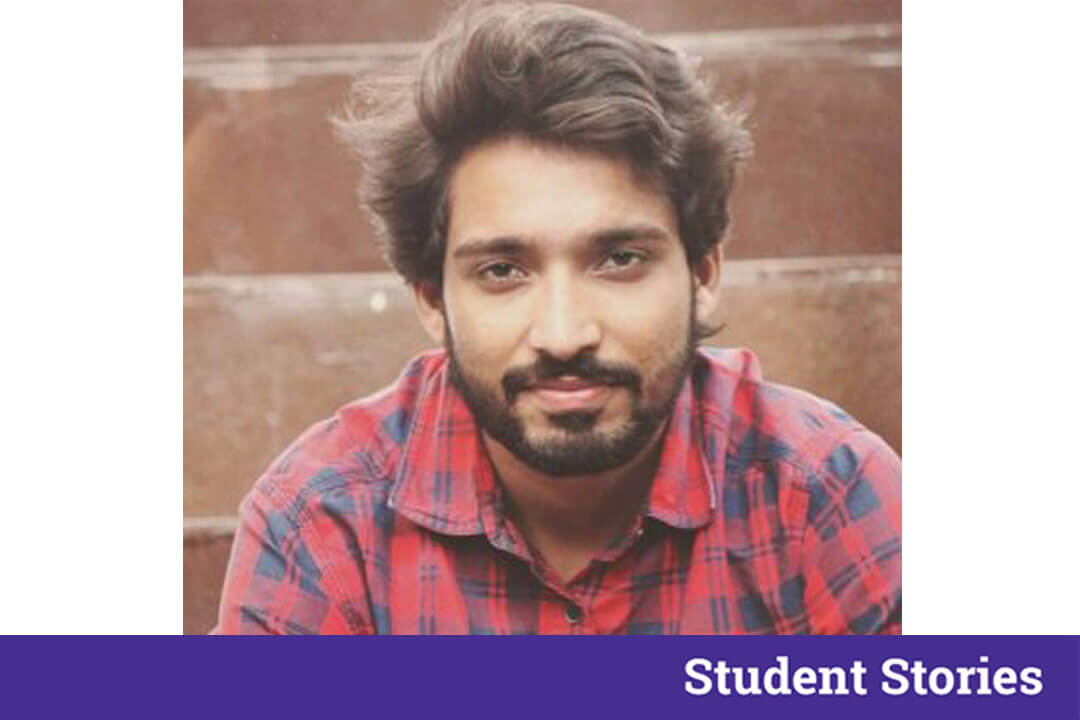 “All I want to do is, help you rebuild yourself.
Restructure your devastated heart. For I
know, it’s impossible to build the exact same
shrine once destroyed in a place but at least
you can make a garden of bliss over a
wreckage”
― Sameer Khan, Eerie Edges

Sameer Khan, who often refers to himself as  “The Warrior of Art”, is in his early 20s and has already won hearts of thousands of people with his writings on love, depression, feminism, LGBTIQ community and such strong issues. He firmly believes, pen has the power to empower the whole world to fight all the atrocities and make this world, a heaven to live in. He had a notion since a kid, that writing helped him bring out all the darkness residing within, helped him purify his soul. He has received acknowledgement for his intense plots and expression of pain, effectively on paper. He tries to display the most hidden emotions in a most agonizing way. His book ‘Eerie Edges‘  is an archive of all the lost emotions, those which people are afraid to exhibit, or those which they think make them weak. Sameer is also associated with a couple of NGOs and Health associations where he narrates stories at old age homes, teaches about life in blind school on invitations, writes healing poems for people who are hospitalised and are suffering from deadly diseases and are on edge of dying.

Let’s get into a poetic conversation with Sameer Khan:

‘Empathy’ I suppose, though I believe, we were all poets by birth. For me poets are magicians, they are strong, stronger than warriors.

2.Can you describe the time when you first realized that this was something you absolutely had to do?

I’m writing poems since I was in class 3rd , but when I had written this poem ‘The Time’ when I was in class 10th sparked a rebel in me, though I had a troubled childhood faced from bullies to failures, this moment onwards I would feel I’m alive and was wise with my approach since then.

The time goes on.

Leaving behind the scars,

With cloak of memories on!

The silence in it’s movement,

Precious as a crown.

The regret we find in us,

The droplet of happiness,

And a rain full of sorrows.

Yet the time indeed,

Is a thing we can’t borrow.

Noises of the past,

And melodies of the future.

And unpredictable is it’s gesture.

Time, the master of the lords,

I hope to swim among the stars.

The bliss of yesterday,

And hardship as well.

The time has passed so far,

Wish that was a place I dwell.

3.What are your writings mainly based on? And how do you get the ideas to start off with the writings?

I feel words have power, to change the world, heal wounds on soul unseen by others. So, I write poems in form of series on Facebook on sensitive issues which requires equal attention like politics and religion.

The series are on topics such as Depression, Feminism, LGBTIQ community and a love story where I’m trying to portray a message to youth a right way to love.

Ideas are floating everywhere. As I say I don’t see humans, I see metaphors.

Well, this is easy. Undoubtedly it’d be Charles Bukowski. I so wish he was alive. We really need a poet with that emotional understanding in today’s era where there is this emotional emergency has arrived. I feel so connected with his way of seeing the world.

5. What do you try to communicate through your writings ?

Writing for me is like creating a home for emotions, a colony of words. Anyone who wishes to roam around into it, or even stay is most welcome. It’s like here ‘trespassers are never prosecuted’. I’m only creating homes for emotions of others.

6. Is there any difference between the old age poets and the modern day young poets? If yes, what and whom do you prefer personally!

Well what I perceive is ‘art always provides current picture of life.’ Though this is a subjective topic. As far I know the only thing that differentiates old traditional poets from young modern poets is discipline, to use right way of rhyming scheme, correct meter or blank verse. Up until Walt Whitman published ‘leaves of grass year’ 1855 almost all poetry was written using either rhyme and meter or blank verse.

When I was a kid I used to write conversations running in my imaginations in rhyme just like conversations in poetic manner on the last pages of my respective class room notebooks. I never focused on lectures. Later writing letters to my imaginary friends during summer and winter breaks, what I used to do was I tore the paper with the message and used to throw it every night from my terrace as far possible and used to believe that It would have reached them. I never kept a record of it. And when I reached class 10th, I started naming my diaries, my first diary was named ‘Noise of emotions’ year 2010-2011, ‘Graveyard of memories’ year 2011-2012 and many more.

Social media is really very powerful, if you understand to use it the right way, nothing can stop you to be successful. It can help you build good reputation, readers, right kind of critics, also help grabbing opportunities which gifts exposures.

Charles bukowski, though he is dead. I so wish to meet him, understand him and then be better than him with his learning of life.

10. Is writing more of a passion or profession for you?

A profession? I’m passionate about writing, I worship it.

This book is all about emotions and feelings, which one finds too difficult to crack or express it to others. I have dedicated this book to the people who are suffering from Clinical Depression and Anxiety. The book is divided into 4 sections, first section is poems, where I have described different kinds of pain, and one might feel related with.

Second section is of prose, to carry forward the feel.

Third section is of Quotes, where I have explained why they are feeling that pain in form of different life quotes on theme depression and anxiety.

Fourth section is of tiny tales to end the book.

Stop fighting so hard. for the people who don’t care. Stop caring too much. Stop getting hurt. Life is too cruel. Love is the only thing which will keeps us going. Yet, stop loving too much. Look inside, instead.

Look for yourself. Give time to yourself. To think, imagine, and explore the strength of your mind. For, your mind is powerful, beyond your imaginations. It has the capability to find answers of life, the questions which can’t be answered otherwise.

You might like a well-structured, well planned tour, but at the end, unplanned road trips, climbing mountains, running across the random seashores is where you find the true happiness. Sometimes, getting lost, helps you find yourselves.