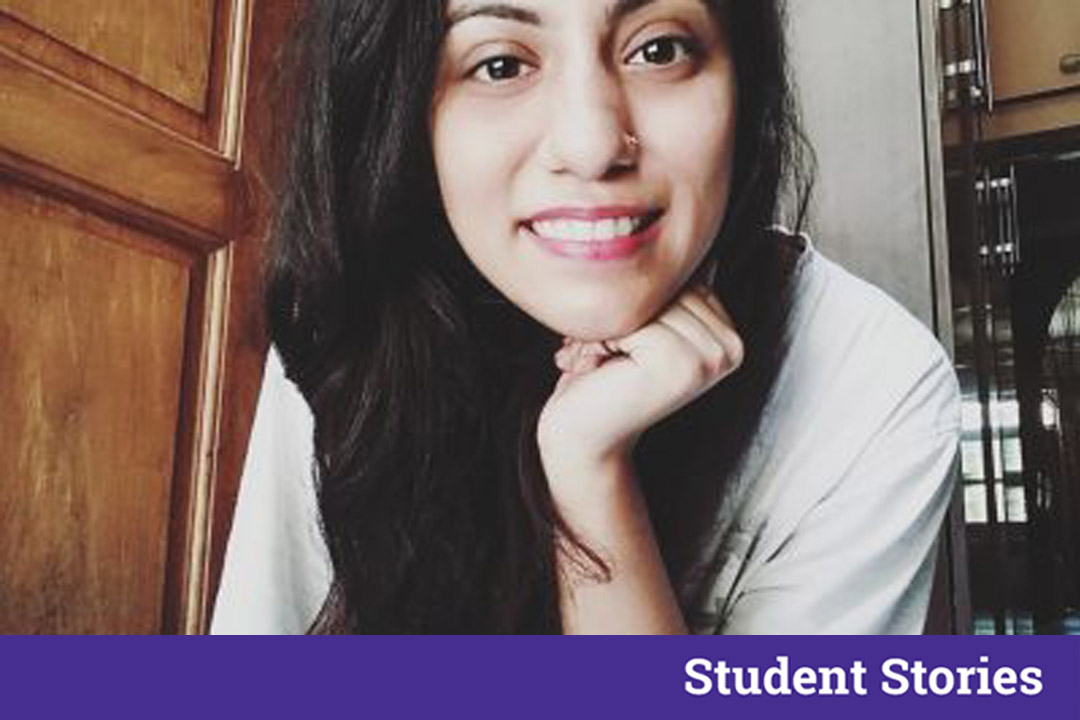 “Reading a book is the most beautiful thing in the world to me. Twenty years into life, and I still don’t know how to receive compliments. I am, and I will always be fascinated by butterflies. The infinity of the universe inspires and scares me at the same time. Let me be, I’m not the usual. I’m an emotional wreck of insecurities, excitement and anxiety. Let me be, I’m not the usual. ” -writes Madhvi Arora.

Madhavi Arora, a final year Computer Science Engineering student, from Amity Noida, is an inspiration to all college students. Taking out time from the busy engineering schedule, Madhavi jots down her thoughts in a beautiful manner in the form of poems or short stories. Even though Madhavi was born in Delhi, she moved to Faridabad right after, so that’s where she lived her life! Besides writing, she also spends her time playing guitar. Cafe hopping and book stores are her ‘guilty pleasures’ as she mentions. It was blogging in Blogger that brought out the writer in her at the first place, before Terribly Tiny Tales. Her first writing was a poem “The moon and the stars”, at the age of 13. Writing is more of a meditation for Madhavi.

Let us get into a conversation with Madhvi Arora:

I’ve heard it from a lot of people that in order to become a successful writer, you need to experience true pain/tragedy. But I truly believe that the most important quality is to be able to feel emotions on an empathetic level. So many of my writings are experiences of other people, and I think it’s the ability to connect with your emotions as well as someone else’s that matters the most.

2. Can you describe the time when you first realized that this was something you absolutely had to do?

Before I started working with Terribly Tiny Tales, I had a small blog on Blogger that two of my friends and I managed. I shared that blog with a lot of people in college and most of them said good things about it. But there were certain people who told me that it hit the right spot and even helped them through some situations in life. That’s when I knew this was something I was born to do.

So most of my writings are things I want to vent out or say out loud, which I usually fail to express. That’s mostly how I get the ideas. Other than that, I love listening to people’s stories which I later incorporate in my writings.

I believe reading is the most beautiful thing in the world. I mean, it’s almost magical. You’re merely reading a string of alphabets while your mind is picturing and imagining everything. Like, you and I could be reading about the same character, but our imaginations will be vastly unique and different from each other. The same is the effect of music. While I love so many writers like Khushwant Singh, Khaled Hosseini, Rupi Kaur, Nikita Singh; I think my main inspiration was music and how some lyrics just hit home. Artists like Ed Sheeran, Frenship, Amit Trivedi, Dot., Prateek Kuhad, and so many others, have been the greatest influence on my writings.

I always try and create my art in such a way that people are forced to think. It could be about celebrating relationships and life, promoting self-love as well as empathy, and helping them understand that love doesn’t heal you, you heal yourself; love is only the catalyst.

6. Is there any difference between the old age poets and the modern day young poets? If yes, what and which one do you prefer personally!

In terms of the emotions expressed, I don’t think there’s much difference. However, yes, the articulation has evolved. I personally believe that art shouldn’t be compared; both of them have their own beauty and charm.

I’ve been a nyctophiliac since as long as I can remember. So my first writing was a poem on “The moon and the stars”. I was almost 13, and I was merely just trying my hand at poetry.

Yes, social media definitely plays a very important role. Being a writer is a very brain-wrecking job. I mean, there are times when you feel pent up and frustrated because of lack of motivation or inspiration. I wouldn’t say that social media validates your art, but it helps give one a push or appreciation for it. I honestly continued writing because so many people in my life and even strangers started coming up to me to tell me how relatable my writings were to them. That definitely made a difference.

I can’t choose between Khaled Hosseini and Ed Sheeran. Khaled’s books are heart-breaking but so beautiful, and Sheeran’s songwriting skills are top-notch.

10. Is writing more of a passion or profession for you?

It started as a hobby and I eventually realized my passion for it. Now I’m considering about turning it into a full-time profession.

The Largest Civil Engineering Fest Of The Country Is Here! IIT Bombay Presents The 10th Edition Of Aakaar on 17th-18th March 2018.
Meet The 21 Year Old Trishita Bhattacharya Who Is Rocking Her Instagram Page With Her Travel Diaries!
Comment