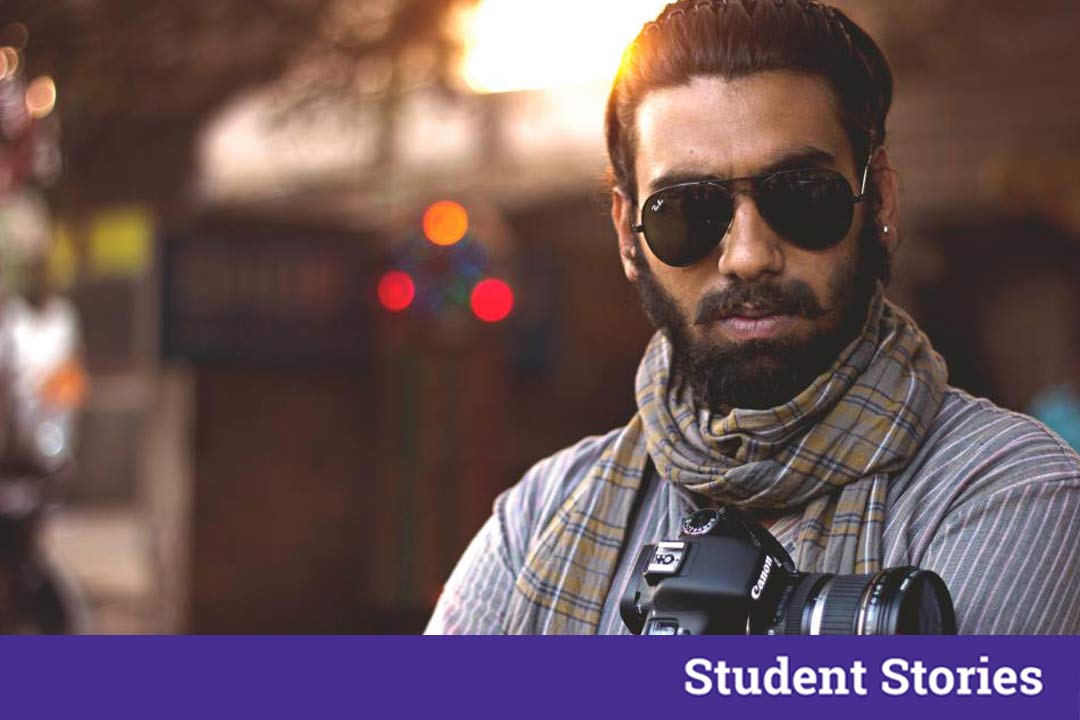 “Know your camera, know your rules, know your light and after that, you can manipulate whatever is required by way of experimentation. But most importantly, know your rules before you bend them.” – says Madhusudan Sunder Raj

Meet Madhusudan Sunder Raj popularly known as Maddy Photographer, a broadcast journalist working and living in Mumbai. He is a photographer at heart, a filmmaker and also an actor in theatre , films, and web series. Madhusudan is a multi talented guy with gold medalist in Bachelor’s Degree specializing in Photojournalism & Documentary Photography. He has also been named by Polka Cafe as one among the top photographers in India under the age of 25. His photographs are highly reputed in both online and offline platform. A portrait of Vijay Mallya that he shot has also been used by Arnab Goswami on his former show, The Newshour during live telecast. Maddy also loves to document culture, people, places, things, light and everything that’s narrative. Madhusudhan has been practicing photography for about ten years now. He says that his idea of photography is living and feeling the 1000 words in every picture.

Let us get into a conversation with Maddy:

1. How did you develop an interest in photography?

ANS: My tryst with photography began in 2010 when I joined a bachelor’s programme in Visual Communication. Coming from theatre, I saw films as a natural succession and hoped of becoming a director. That’s when the idea of freezing light & time caught my attention. Within days of picking up the camera, I drifted away from direction and knew I had found my destiny in photography. A film called “The Bang Bang Club” influenced me to great deal & I decided that I will pursue a career in Photojournalism. Having been an activist in my late teens, the thought of using photography as a medium to bring about change drove me to further master the art & intern as a photojournalist as a part of my final project.

2. Do you have any formal training?

ANS: Yes, I am a graduate in Visual Communication with specialisation in Photojournalism & Documentary Photography from Sathyabama University, Chennai.

3. Among your works, which one is your favorite? Why?

ANS: “Which of my photographs is my favourite? The one I’m going to take tomorrow. – Imogen Cunningham

I have always been inspired by this famous quote and I personally would not like to have favorites among my pictures. But to name a few, for this interview, I would say a portrait of a woman I shot during my travel in rural West Bengal remains my favorite ever although it was during my earliest days as a photographer. The frame has a lock in the background and the emotion that object struck, drawing parallels to the locked lives of rural women, makes it my favorite. I also like the pictures I shot as a part of my photo documentary “The Famous Case of Victim X”, centered around the protests post the brutal 2012 Delhi Gangrape.

4. Whose work has influenced you most?

ANS: A whole lot of photographers, filmmakers & cinematographers have influenced and shaped my interest in photography over the years. My first influence was Steve McCurry, an award winning conflict photographer, who has been recognised as one of the best to have ever mastered the art. I am also influenced my artists like Henri Cartier Bresson, Ansel Adams, Kevin Carter and the likes. My influences in Cinematography are Emmanuel Lubezki and Santosh Sivan. In the filmmaking arena, I like documentary filmmakers such as Micheal Moore, Anand Patwardan. I am also greatly influenced by directors such as Quintin Tarantino, Martin Scorsese, Clint Eastwood, Mani Ratnam, Shankar Nag, Satyajit Ray among others.

ANS: I believe digitalization of photography was a big change in the industry. Photography, which was being perceived as an expensive hobby became more affordable & with it the skillset required to be a photographer also drastically reduced. Old time photographers would see a subject under a particular light and could judge the EXIF data instantly. Digital photographers, thanks to the ease of image sensors, fail to develop that sense of judgement without trial and error. Post production, which was a tedious process in the film days has also been simplified by softwares, which can even run on phones. This has greatly affected the quality of skilled photographers while the quantity has been ever increasing. My view on this would be that digitalization has its own advantages but the cons overweigh the pros when it boils down to the creativity and expertise of photography practitioners.

6. How do you get the person, place or thing that is in front of the camera onto the film, chip or paper in just the way you want?

ANS: I believe every photographer should first be an artist who understands light, shadows and the elements of making a picture. It is easy to take a picture but difficult to make one. A subject, be it a person or still life, needs to be understood in the sense of how best it can be portrayed with the available light. Perspectives of people differ but the point is to make your perspective as visually communicative as possible to the viewer. One needs to work on the three basic elements of photography: textures, patterns & perspective to grow as a photographer. A photographer must be willing to do anything to get just the right picture. One cannot stay in his comfort zone and expect everything in the frame to fall in place. Photography is the art of capturing light and the art requires the photographer to aesthetically make the frame considering all the aspects of imaging.

ANS: I want to be a conflict photographer and I am working towards that. I want to document the ill effects of war and persuade to bring an end to the bloodshed. I want my pictures to be thought provoking and make leaders of wars & conflict introspect about their actions. Since I do not have first hand experience in conflict photography, I would skip the second part of the question with respect to documenting wars. But on a wider perspective, the urge to perfect the image to communicate what the photographer wants to say is the only driving force that will push the creator to do his best.

8. What technology/software/camera gear do you use to keep focused on what you do best, as you photograph?

ANS: Music is my medicine and I always fall back to it whenever required as it helps me to focus. Music apart, I use some post processing softwares such as Photoshop and Lightroom to tweek my pictures. While I do not endorse photo manipulation, I do believe that using softwares for making an image presentable is not a crime. My gear includes a basic Canon 550D, which I bought to learn photography, and a 50mm f/1.8 lens. But I do hire sophisticated equipment based on the requirement fort shoots.

9. What makes the good picture stand out from the average?

ANS: A good picture must have an aesthetic appeal on the viewer, while efficiently conveying what the photographer intends to say. Using the aspects of photography, a picture must provoke an emotion in the mind of the viewer. Photography is not all about glamour. One needs to keep the glamour quotient while also communicating the intended message. Unlike moving pictures, photography is a single frame, freezing a moment in time. A picture can speak a thousand words and is a perfect platform for the creator to converse with the viewer.

ANS: My biggest achievement would be that I finished my Bachelor’s Degree with a gold medal, specializing in Photojournalism & Documentary Photography. I was also named as one among the top photographers in India under the age of 25 by Polka Café, an online platform for social content, in 2015. My photographs have been published in various online & offline content platforms. A portrait of Vijay Mallya that I shot has also been used by Arnab Goswami on his former show, The Newshour during live telecast.

11. Any message you would like to give to all those aspiring photographers out there?

ANS: Photography is not merely a hobby but a serious art form. The best way to master the art is by practice. While practical approach is the way forward, theoretical knowledge about light and the camera will be helpful in understanding the art in depth. Every photographer first needs to understand light – as it is the most basic element of photography. Thanks to digitalization, it doesn’t cost much to practice the trial and error method and photography enthusiasts must not shy away from doing so. Thanks to the internet, there are several tutorials that help teach the various techniques of photography. One must not be disappointed with not getting the actual results at once but must work hard to achieve what is intended. Know your camera, know your rules, know your light and after that, you can manipulate whatever is required by way of experimentation. But most importantly, know your rules before you bend them. Happy clicking!!

A Young Soul Who Sees the World Through the Lenses of Nikon, Meet the Dazzling Photographer: Mohit Kumar.
Meet Gauri Awasthi, Writer On Terribly Tiny Tales And Buzzfeed India, And Co-Founder Of A Very Unqiue Initiative ‘The Vegan Wardrobe’!
Comment