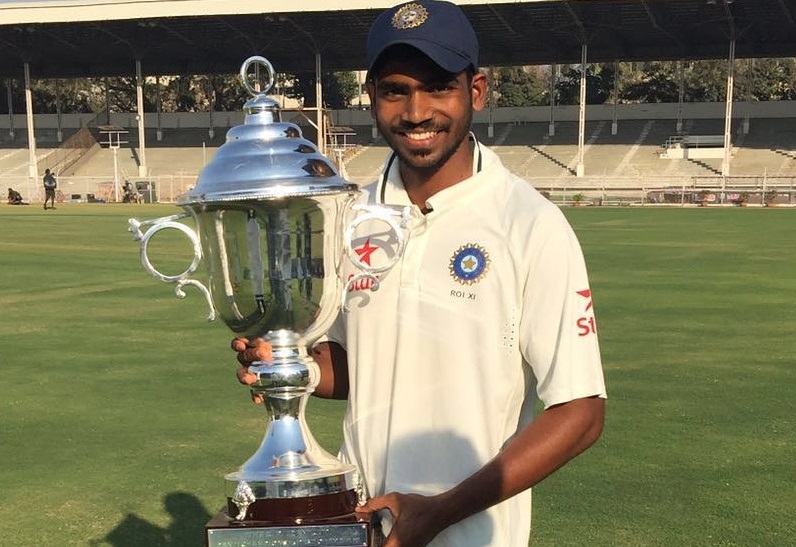 Born on 3rd October, 1993 in Vishakhapatnam Andhra Pradesh, Kona Srikar Bharat is a 23 year old Indian cricketer who plays as a wicket keeper batsman for Andhra cricket team in domestic cricket. He probably became the first wicket-keeper batsman to score a triple hundred in the history of Andhra Cricket association and India as well in February 2015. Owing to his achievements he was signed up for Rs. 10 lakhs by the Indian Premier League franchise Delhi Daredevils in 2015.

Regarded as one of the best wicket keepers in the circuit, he has a career profile of 130 effective catches behind the stumps. With an effect of a total of 185 catches and 24 stumpings over 200 plus victims he has a total of 4 Man of the Match awards in the Ranji trophy so far. His trophies include:

1- Man of the Match award for  representing  Ranji trophy from Andhra.

2- Man Of the Match award given in U19 south zone match at Shimoga.

3- Man of the Match award against Gujarat in Ranji Trophy.

4- Man of the Match Award for T20 Charity tournament.

Also he has kept his bats as memories and he highly loves them and feels happy to be with them.

In conversation with KS Bharat:

Q: When did cricket interest you? When did you realize that cricket is what you want to take ahead as your professional career?

While growing up in my locality the only thing which excited me was cricket. I loved playing it with my friends. Later my dad saw that I’m keen in playing the sport. He used to take me to the ground and then we used to practice hours and hours. He used to feed me the balls and my job was to bat and then we used to return home. By nature I’m a very crazy person. I always kept myself busy in works. It was almost impossible for my parents to keep me quite at home and that’s when my parents decided to send me to the district academy nets.

Q: From where did you start learning the nuances of cricket? How did you learn the tips and tricks of cricket?

It’s a process which takes life long for someone who wants to get better at this sport. At my childhood I had a lot of failures in my cricketing life. Like I hardly used to score or play as a young promising cricketer would do. I learnt in the hardway. The more I had a bad day at ground the more I have learned .

Q: In the 62 year old history of Andhra Cricket association and Infact in India you emerged as the first cricketer to score a triple century? How do you feel about it?

It’s really a good feeling to score a triple hundred. You feel good when your hardwork pays off. Not only for Andhra but also the first Indian Wicketkeeper Batsmen to score gives me a lot of the feel good factor. But honestly I have moved on from that moment.

Q: So according to you what is the most important factor to keep up with the rhythm? How to tackle mood swings and pressure in the game?

There are hundreds of people who have helped me to be where I stand today. The one who has constantly helped me shape my career is my coach J krishna Rao. Right from my U-10 he has been there with me and helped me on and off the field. And since an year Abhishek Nayar is there who monitors me too.

Q: How important has IPL been for you? How did the experiences helped groom your play?

It’s a new level all together. I have gained alot of confidence by being a part of it. My will as a player to play at the higher level just strengthened up.

Also read “Rahul Chahar : Success Journey of an All Rounder in Under 19 Indian Cricket Team”

Q: What are your future goals? What is the biggest dream of your life?

My future goals are simple. I have to play each game of cricket  as hard as I can. Follow the process and be a match winner. My ultimate goal is to play tests for India. And definitely I do not just want to play but also want to perform good at every platform.

Q: What is your message to the aspiring youth looking for a breakthrough in the Indian cricket team?

My advice would be work smart and hard. Have discipline on and off the field. Maintain good fitness levels. Be a best team man and a human being. Always walk with confidence and be aware of the situation. Follow the process then things which need to come our way will automatically fall in place.

“Mount Everest Is’nt That Tall For Me”, Thrilling Experience Of The Youngest Indian Female to Climb Mount Everest at 13
Breaking All The Records, This Indian Teen Becomes The Youngest Post Graduate In Asia And International Tennis Champion!
Comment