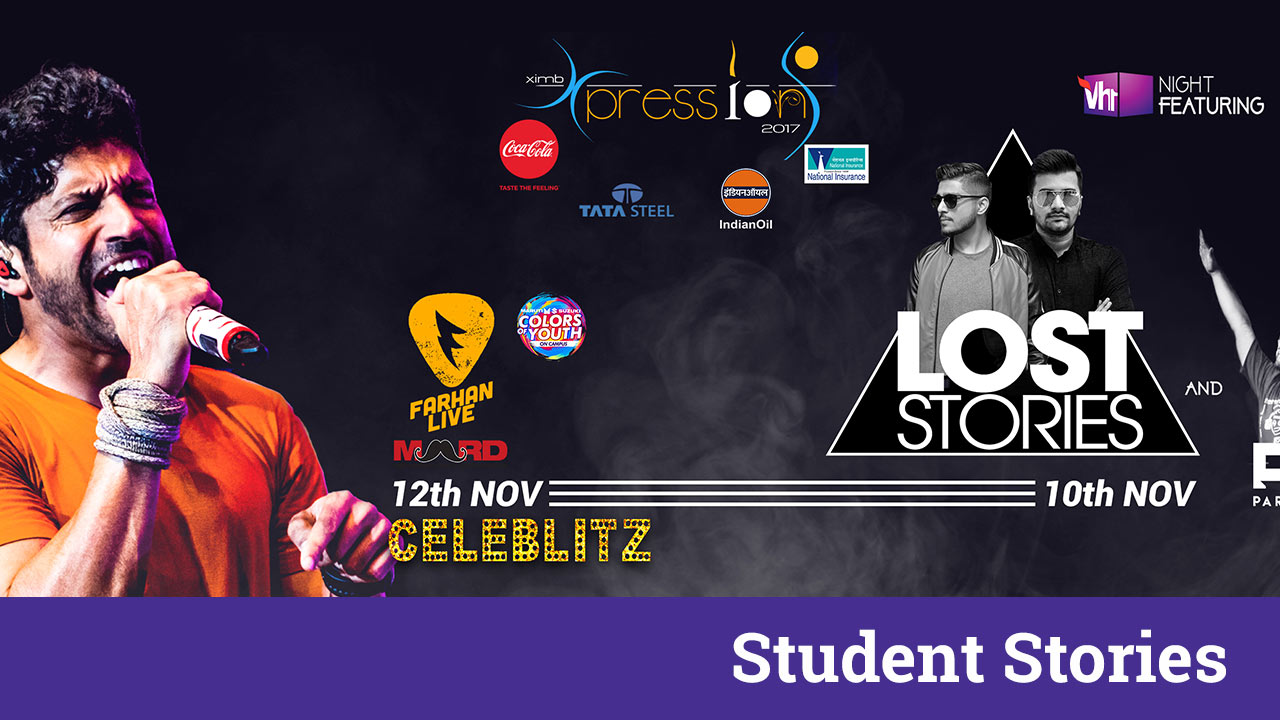 Xavier Institute of Management, Bhubaneswar-Xavier University (XIMB-XUB) kick-started Xpressions’17, the biggest B-School Fest in India, on 10th November 2017. The day was marked with enthusiasm and exuberance of participants and audience, truly justifying the 3 months of planning and efforts of the students.

It kicked off with Business Simulation events such as Gladiator, Skill City, Kurukshetra and Helios, the flagship mega events by the gaming committees of XIMB-XUB. Gladiator, a simulation of real-world management scenarios, tested the best brains in the country to unravel their business acumen. Skill City, one of the toughest business events, had teams prove their mettle in soft skills through a series of rounds. Kurukshetra, a virtual battlefield which tested the participants’ business acumen, saw teams fight it out to make it through to next round. Helios, the only under-graduate specific event saw young minds harvest their raw managerial wisdom in challenging business scenarios in the HR and Marketing modules. The very first edition of HR Xpress, a flagship fun event of the HR Association-XIMHAR, also took place as a part of Xpressions’17.

The next in line was XIMB-XUB Model United Nation, a simulation of proceedings of United Nations, organized by SpeakUp, the Oratory Club of XIMB-XUB. Parikrama-a single round National Level Online Treasure Hunt Competition by X-Sys, the Systems Association of XIMB-XUB, tested the participants on general awareness, presence of mind and analytical skills. Social Responsibility Cell (SRC) and SpeakUp hosted Vakritva, an elocution competition laced with creativity. The second round of Nirnay – An operations business simulation game was also organized, which tested participants’ acumen in operations.

Xpressions also held its first of a kind paint ball event- Paint it Up by the International Relations Committee. Paint@XIMB, organized by Spicmacay, XIMB, a painting competition helped the participants unleash their creative side. LitSoc, the Literary Society of XIMB-XUB also culminated its event, “Flight of Fancy”. Participation was observed from various B-schools from all over the country in the solo singing competition- Goonj. Carnival De Vogue, the Fashion Show of Xpressions was filled with bright personalities walking with elegance and panache. The first day of Xpressions concluded at a high note with the much-awaited EDM Night by Lost Stories, an Indian duo composed of Prayag Mehta and Rishab Joshi.

The morning of 11th November saw a fresh wave of excitement at XIMB, as the college bustled with a myriad of events. The business simulation games, Kurukshetra, Gladiator, Skill City, and Helios continued to challenge the students in their subsequent rounds on day 2.0. A fun, interactive ‘Maxim Mela’ was organized by the Marketing association of XIMB with the colorful theme of ‘The Jungle Book’.

Case study competitions presented a platform for students to come up with innovative strategies for handling complex business scenarios. Maven saw many teams from some of the most elite B-Schools competing over several rounds. Case Connect witnessed the top teams, selected through an offline quiz; grapple with various domains of business. M-power through its series of elimination rounds over the past couple of days finally culminated with its final presentation round. Trade Wars was a unique online trading simulation game that required students to apply their financial strategies in Indian Stock Markets in real time quotes.

Urbaniac is a business simulation competition aimed at building sustainable, smart and livable cities organized by ConXerv. Case in Point, the Case study competition organized by XIMAHR encouraged participants to showcase their analytical and problem solving skills. A fun and lively event, ‘Baal Baal Bachey’ was conducted by the committee for sustainability. Students were tested upon their knowledge, analytical skills, their business acumen and their strategic thinking in the event- Ascend. Vridhi- a CSR Case study competition saw many teams participating who not only developed the Business model for the industry, but also people who will be affected by it.

Xpress on Air, the RJ hunt competition in association with Sarthak FM, added spice to Xpressions with 10 aspiring RJ’s making it to the final lap to portray their wit, fluency and presence of mind. Quizzing being the hobby and forte of many, XIMB also conducted Inquizzitive- the Flagship Quizzing competition to test the general knowledge and mettle of students. XIMB was enveloped in a color of culture with events such as Goonj and Pratibimb. Pratibimb, the face- painting competition saw students create magnificent face paintings and go wild to discover the artist within them.

As dusk approached signaling a thousand lights springing to life, the atmosphere dived into a different dimension as ‘DecibelZ’ powered by MTV Beats, XIMB’s band-hunt competition kicked off to some thumping beats, captivating the audience with its rhythm. The event attracted a huge crowd swaying to the masterful renditions by bands from Calcutta, Bangalore and other cities from far and near.

With unmatched enthusiasm, camaraderie from students and able aid from our benevolent sponsors Central Bank of India, MCL, Coca Cola, Indian Oil, TATA Steel, Arrelic, National Insurance, Mayfair, Maruti Suzuki- Colours of Youth  and Safexpress for the, day two of Xpressions’17 ended on a high crescendo with a promise of a lot more to come on the final day.

The Young Rockstar Of The Dance World Who Is Making India Proud – Ralph Mao Reaching The Zenith With His Talent !
The RISE Of Amol Mann ! The Powerhouse of Talent From Punjab Who Won Millions Of Hearts With His Debut Song- ‘Haan Teri’ With T-Series!
Comment