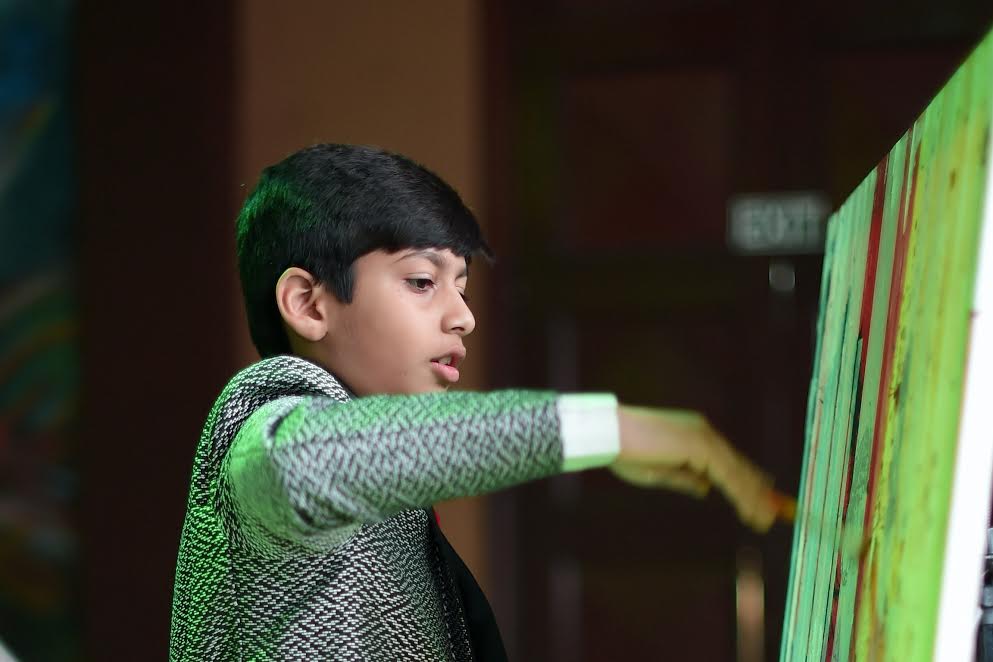 Shorya Mahanot, a student from Kendriya Vidyalaya, Neemuch (MP) is the “World’s Youngest Signature Style Abstract Artist”. Shorya has been winning laurels from the age of three years because of his unique painting style. The painting of this 10 year are sold at the price of 45,000 dollars and has been placed alongside the legendary artists like Anthony Quinn, Burt Young, John Lennon etc. His view is compared in similarity with Sir John Pollock which places him on this world arena of higher appreciation.

Shorya’s incredible techniques about his art and best moments:

Every moment is the best actually. Whenever I pick up my colors, I don’t just paint, I play with the colors in such a way that anyone who looks at them feels like they are reading a story. With every painting of mine, the signature style of an abstract art evolves. I work with acrylics in a heavy impasto technique that has been compared to Jackson Pollock’s “drip painting” or “action painting”. Like Pollock, I spread my canvas on the floor and compose with my masterful strokes in multiple layers and deliberate consideration of color composition. There are a rhythm and symmetry between my brushstrokes, dripping, and pouring. With all joyfulness of my youth, a magical world is revealed. Whenever I do my drip painting, I look at the world in a different manner. Sometimes a blissful moment opens a window, showcasing a world of colors. The world that is beyond the thoughts of shapes and sizes; a world bursting out with colors. One color gets mixed with another and becomes the third one. At times, it becomes a color that even I can’t name. It is that color from beyond the window and I keep staring at it till it disappears and yet makes sense to me. The world beyond that window where colors appear and disappear makes me feel delighted. Those colors, I can’t get them off my mind and when they get down on my canvas; the world calls that my painting. People compare my paintings and say that I have a ‘signature style’. But for me, it’s just a beautiful feeling. That is why the best moment for me is when I paint and lose myself in it. I also feel very good when people praise me for my work.

Who according to you is the best painter and whom do you see as your ideal?

All artists are good everyone has a different vision which they want to show the world. Every artist has his own vision and view of the world. But, if I had to choose one Jackson Pollock is my muse.

What will be your message for the people who have artistic skills but are afraid to take it up as a career?

I would just like to say that “Don’t be afraid“. If you have creativity, then this world is but a canvas to your imagination and success will follow you. Artists should not hesitate to manifest what their heart wants to portray at any point in time.

Also read “Secrets of the hyper-realistic 3-D drawings that will leave you stunned: By 21 year old, Sushant Sushil Rane“

This Girl Has Always Held The Audience Spellbound With Her Mesmerizing Singing And Elegant Dancing | Swethaa Naidu
From Not Knowing Hindi To Winning “Indian Idol Junior Season 1”, This Girl Will Teach You The Importance Of Hardwork
Comment