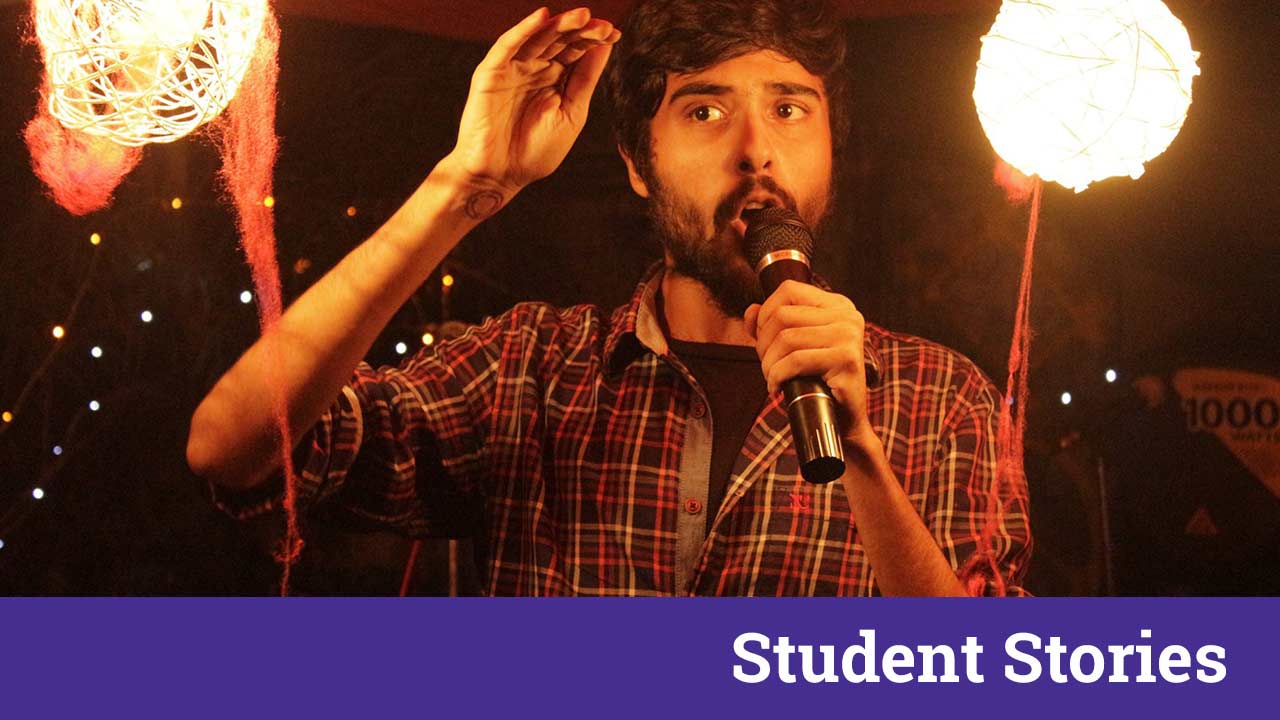 Meet Rivu Ganguly ,a standup comedian and a star performer.  All the young guys and girls who are struggling in the rat race to grab the biggest piece of cheese, he will help you not only to get your cheese but also make the most delicious pizza from that cheese, because its only about the perspective and its all about life.

Once we see his stand-ups we will indeed be willing to enquire about his talents and once we learn about his struggles one would definitely be extremely inspired by his life. He is also associated with Kolkata’s prime stand-up comedy group Kalkutta Komedians  He always believed that “no matter how dark it gets the sun will rise again”  This talented youngster is an Economics graduate. He quit his job just for comedy and now he just writes and tries to stand up. Let’s know more about this dazzling and inspiring performer.

In a conversation with Rivu Ganguly :

We hear so often about the lack of original stories in the world, all of us say “SEEN IT BEFORE”. How do you stay fresh in the face of an idea like that?

Well plagiarism is a very real issue in this industry. That’s why whenever I come up with a topical joke, I check with other comics cause a lot of time thoughts become aligned to a joke that’s been done before. However I avoid topical jokes and mostly do stuff I experience in family and otherwise. So they keep giving me fresh material. And I don’t have to worry about anybody stealing them.

What is the difference between trying to write jokes and develop stand-up comedy material?

Well some jokes are funny only on Twitter or paper. To develop the joke into a stand up bit takes time because you would want to add tags and act outs to the joke. And the only way to do that is getting on stage and doing open mics. Just the premise and the punchline aren’t enough sometimes. Unless, of course, if you have the right persona to pull it off. Like Mitch Hedberg.

What are the secrets for telling everyday jokes in order to get the biggest laughs from your audience?

Well I haven’t figured that one out yet. I am getting medium laughs now. But its all about writing and what you observe. Someone once told me, “Everything is funny. Just keep writing and you’ll find a way to make it funny. ” Also open mics.

What according to you is the relationship of comedy with depression and suffering?

Well depression is real. People should come and talk to their friends or come talk to me. I’ll talk to you. And it’s high time people started taking it seriously. We can’t say things like “Oh Cheer up”. If they could Cheer up, they would cheer up. So talk. And talking is what comedy is. In fact comedy is the only form of talking where you can ease your soul with laughter instead of directly plunging into the points at hand. Laughter is a medicine. I can’t say if it’s the best but it’s pretty damn close.

What makes your stand-up comedy unique and different from other comedians?

As I said, I don’t do too many jokes about politics or current affairs. So the chances of having a joke clash with anyone are zero. I talk about my daily life experiences. And when I call people for a show, I hope that they’ll get to know me a little better. Not my political views. Your personal experiences and stories are always what makes you unique.

Sometimes when people go shopping for clothes they will see something they really like, but they won’t buy it because it doesn’t go with anything else in their wardrobe. Do you ever come up with jokes that aren’t in your voice and that wouldn’t go with your act, like something dirty or really political, so you don’t use them ?

Yes, that happens quite a lot. But I don’t like giving jokes away. I’m selfish like that. I just put those jokes on social media.

A friend of yours just got married a month ago. He is also pursuing a career in standup comedy. Any advice on how to make that work?

Well I hope he continues doing stand up and doesn’t quit under pressure. I don’t know who you are talking about but that’s the general advice.

Do you find that your style of comedy works better with some audiences than others? Do you write your own routines or are you spontaneous on stage performer ?

Yes definitely. But most of the times if the room is full and good and warm, it’s the best thing you could ask for. So getting a chuckle from them is also a beautiful feeling. But yes. I generally feel I connect to young and middle aged people more because oldies don’t get the tech references. So I try to avoid those references. And yes. Writing is the most important thing I believe. Sometimes I’ll try a premise on stage without writing to see what comes out spontaneously. But I write on that once I get some tags.

Also read ” All Things Bengali And Nice ! Aquib Beg Will Not Offend You But Only Entertain You! Meet The Star Performer From Offensivitis“

Comedy is evolving everyday. So trying to spin everyday mundane situations into a joke is a thrill sometimes. And that’s what keeps us stand up comedians going. Just write and get on stage. That’s what I’m doing.

This 19 Year Old Is Capturing Hearts All Over Social Media With Her Beautiful Poetry! Meet Somya Singh : ‘TheDarkEscape’
This 23 Year Old Is Transforming Bengaluru’s Art Life – Nishka Mehta The Woman Behind ArtBeat !
Comment