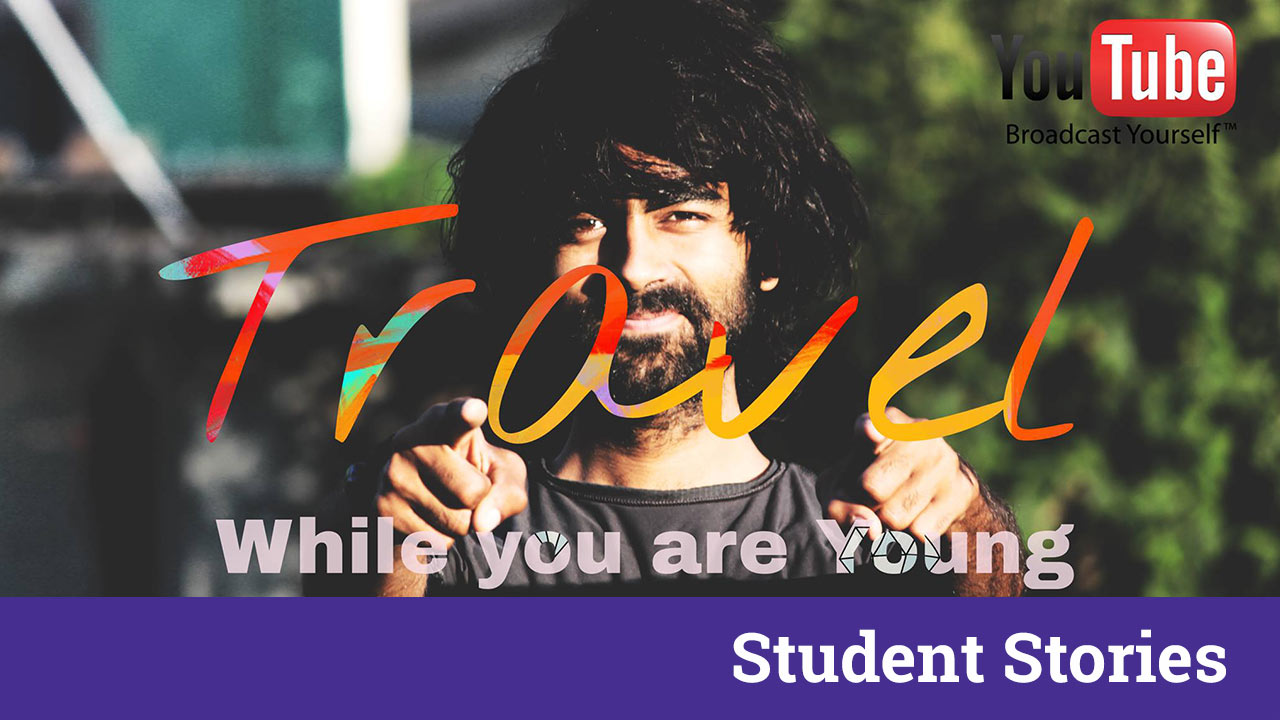 His belief is that traveling is for two kind of people- Those who are running away from something & Those who want to find something. And there is a bit of both in him.

The 22 year old Neeraj Ratnu who is a mechanical engineer, left his house after completing his graduation in the quest of traveling the world. And now, he lives a beautiful, nomadic life exploring a lot of different places. After his graduation in 2016, he decided to not take up a job, in spite of being selected by many companies.
His blog, Nickthevagabond is a live story of a penniless nomad and his experience on the roads traveled by him. It is the story which begun with a ‘Dream Of Traveling Around The World’ and how he pursues it. He does freelance work like blogging, photography, and video shooting because of which he keeps his travel life going forward.
According to him, the 20’s is the age to experiment and that’s definitely what he chose to do. He didn’t want to settle with a secure life, earning money in a 9-5 job like most people do. Rather, he wanted to explore the world and its beauty, different places and their traditions, different languages and their art, and many more things. The exploration started in 2010 and he has by now traveled a lot of places. Let’s explore the journey of this solo traveler in the interview down below.

In the words of Neeraj Ratnu himself :

1. Hello Neeraj, How does it feel being a traveler?

I think we all are travelers, some people are just stuck at the same place because its their mistake. We are here to experience God’s best creations, not to do a job for 40 years and then eventually die. I feel blessed everyday because of the places I have seen, people I have met and the stories I’ve shared.

2. Is it always pleasant to travel over the world?

Travel is not easy. It’s tough, it’s hard. It even shakes you from the inside sometimes, but at the end you will never regret it. Traveling alone can sometimes get boring and that’s why I always look out for some adventures on my way. Hence, planning crazy trips with crazy people is the best feeling ever. Its a great feeling sharing and listening to human stories and that’s one of the best parts of traveling. It’s a saying, “In the morning you might not know what you are doing and where you are going, but until the sun sets you always feel blessed just because you travel.”

3. What was the most unusual thing you saw or did during your travel?

I was staying with a shepherd in Changtang Plateau where they served me a special type of meal that was made from yak blood. It was the most unusual thing I had ever had. Also, I was once in a village named Mayong, Assam; which is the capital of black magic. Someone tried to teach me teleportation but I didn’t want to go deep into it since I was really scared.

4. Would you like to revisit or move over to any place you’ve visited so far?

Sakyong. Its a village in West Bengal. I spent a week there and I am totally in love with this village. There are many villages like Nongriat in Meghalaya, Rajgunda in Kangra where I want to go again. Probably once. ❣️

5. What is your favorite thing about traveling?

People. Travel is all about people. The type of people you meet, and especially the stories you share are the best memories and experiences you gather and never forget.

6. What are a few things you always pack and without which you do not travel?

My Sleeping bag, My travel Diary and Dark Chocolates.

When you are out there alone in the foreign world, no one helps you better that your gut feeling. Therefore, always follow your instincts when you travel solo. And in addition to it, learn to say no, if you feel something is wrong and most of all, if you do not want to go anymore further.
We wish Neeraj the best of wishes to fulfill his dream and live a life he never regrets.

19 Year Old Ananyaa Mehra, A Select Writer At Terribly Tiny Tales Whose Writings Will Leave You Awestruck!
“Let Your Voice Be Heard Because It Matters !” AIESEC Mumbai Brings To You- ‘Youth Speak Forum 2017’- Where Leaders are Born & History Is Made !
Comment