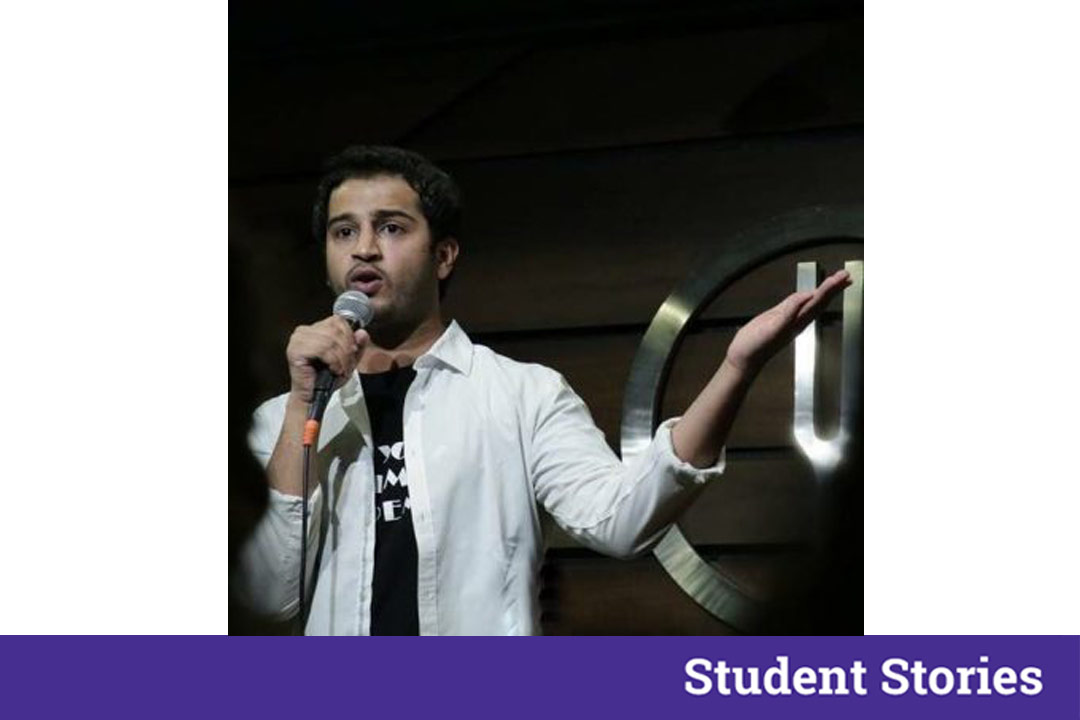 Jackie J Thakkar was in his land of imaginations trying to capture some beautiful lines for his poetries; when his pals smelled the aroma of humour hidden somewhere between them. And now walking through the lane of comedy and winning three laughing coconuts at Hijas Moosa’s Fresh Comedy and also the prestigious COME Grand Slam he has gained huge popularity.

His poetry “Millennial Romance” has gathered about 100k views. He is also a Spoken Word Poetry performer, and has been featured in publications like StoryPick, Scroll India, Indian Express, Bayside Journal and Radio City’s Freedom Podcast as well!!

Let’s peep into his life with a short little conversation:

Hello Jackie! Tell us something about the comedian in you?

Why hello! This feels totally organic and does not make me seem pompous at all! (Chuckles) But in all honesty – and I wanted to say this right off the bat- I really don’t think of  myself as a full-fledged “comedian”.  Not yet, at least. Mainly because I’m still evolving as a writer/performer and there’s so much I’m still learning from the audience and my fellow  performers every time I go out there. So thank you for having me but as a performer, I’m afraid I’m just a regular dude, trying his best to make people laugh through stories and  stray observations. Deal with it. Also, I really consider myself a writer before anything else. I’ve been writing professionally since I was 18 and am fortunate to currently be employed with Arré, one of the best  platforms for cutting-edge digital content in the country. Writing and working on their video sketches has easily been the most fun I’ve had creatively in a  long time.  These past few months at Arré have taught me that some of the funniest people you’ll meet aren’t necessarily stand-up comedians.

What made you gain interest in the field of comedy? Who has been your role model?

Hmm. I think I just sort of spring boarded from Spoken Word Poetry into StandUp Comedy. I started doing Poetry open Mics regularly for about three months. Eventually, a lot of my peers in the poetry community encouraged me to take up stand-up comedy since most of my pieces had elements of humour anyway.  So earlier this year I just decided, “ Let’s give it a shot.” And here I am.

In terms of role models, there’s quite a few. Off the top of my head, there’s Dave Chappelle, Vir Das and Amy Schumer. Though Varun Grover remains my biggest inspiration.  His confession on “I am Offended” where he talks about why he got into standup comedy and quit his job as a TV writer is perhaps the singular moment I attribute to me deciding  to take up  comedy.  He made me believe that what a comedian says can make a difference. And I REALLY wanted to make a difference.

Also Read: A New Hemisphere of Creativity & Innovation : Dextra- A Global Platform To Awaken The Lost ‘Artist’ Within You !

How do you handle the stage fright if you have any?

Okay. This may come across as a bit dark but it works for me. (Pauses) So any time I get jittery before getting on stage, I just remind myself of all the people I’ve lost over the years.  You know, people that you give your heart and soul to and expect them to be there forever? And then they still leave you. Because in the end, there will always be screw ups and you WILL lose people. No matter how hard you try. So instead of focusing on stage fright, you might as well enjoy yourself.

Look, I told you it’s dark and might not work for everyone. (Chuckles). I just think it’s a really liberating thought and totally prepares you to face an audience of strangers who will eventually leave or get bored even despite you giving the best show you possibly can. So forget about stage fright and have a blast up there!

Tell us something about your early life, the life before becoming a renowned comedian?

“Renowned”? (gasps) That’s pushing it a tad, no? But I grew up an only kid and was a pretty problematic child till my teens. After which, I spent 4years finishing my studies and then working in L.A and Dubai. I’ve been back in Bombay since early 2016 and couldn’t be happier; It’s home. I just wish I could put my UCLA and New York Film Academy education to  good use someday.

What have been your biggest achievements so far?

Well, since I began comedy in February, I’ve won 3 Laughing Coconuts at Hijas Moosa’s Fresh Comedy, reached the Semis of the Classic Rock Comedy Hunt in Pune; both stellarfeats that I look back at with immense fondness. But winning the prestigious COME Grand Slam in June this year was especially awesome. It really put me on the map  because Jeeya Sethi’s Comedy Ladder is one of the oldest Open Mics around and winning the coveted Grand Slam tournament meant getting a lot more stage time along with the  chance to be taken more seriously as a stand-up comedian. Talk about an oxymoron!

In terms of Spoken Word, I’m very grateful to Simar Singh and the good folks over at UnErase Poetry who featured my poem “Millennial Romance” on their YouTube Page which has since garnered close to 100K views online.

Tell us about some of your other hobbies?

Technically, Standup Comedy is still my hobby. Because I’m a long way from being able to support myself through it. (Chuckles) But I’m really into gaming and love my  weekend GTA sessions. They are virtually therapeutic. And even though lately I haven’t had much fun driving because of how bad the traffic and roads have gotten, I’ll still indulge in a long drive to Marine Drive to clear the cobwebs.

Are your jokes inspired by your daily life incidents?

Oh absolutely! A lot of my jokes are basically stories from my life that I’ve amped up for comedic effect. For instance, my break up set is entirely based on true incidents. Not to  mention, there’s a ton of stray observations I make through the day which I’m sure to note down in my little notepad. It helps a lot while sitting to write new sets.

How do you handle the pressure of being a comedian and making your shows worth remembering when you are aware of the competition in the field of Stand-Up comedy?

To be honest, I really focus on having fun up there as opposed to thinking of it as a competition. And I’m not being full of myself here. It’s just that it’s pointless to think of it as a  competition as of now because most of us newer comics are all in the same boat. We are all finding our voice and audience. The established comics who’ve been doing it for ages  are in a different league altogether. I can speak for a bunch of newer comics who I’ve interacted with: the focus for most of us is on getting better than we were at the last open mic, rather than it is about getting better than the other guy/girl.

And while listening to the audiences’ reaction is obviously sacrosanct in this line of work, there is also an argument to be made about the importance of being as relatable as you  can to an audience. A big part of that is ensuring that you’re having fun up there. Sure, getting big laughs is great. But as is the case with any performance art, you also have to  make the audience live vicariously through your act while up on that stage. And that’s what I strive to do most.  Make people go,  “Yeah man! That’s what I’ve always wanted   to  say/do” . Perhaps even more than laughs.

Any advice you would like to give to those who are aspiring to be in this field?

This feels weird because I’m honestly still learning myself. But the little I’ve learned so far is that it helps if you’re always hungry for stage time, not being a jerk in the name of being edgy and not letting anyone tell you what your voice is or should be. Most importantly, keep evolving and have a blast up there!

Meet Nivedita Sharma, The Dancing Star Who Was Featured In The Movie ABCD 2 And Is A Member Of Kings United India!
“Her Writing Is Rooted In The Harmony Of Oneness And Seeking Of Universal Truth”- Meet The Very Famous Author of “Magic I” , Sepi !
Comment