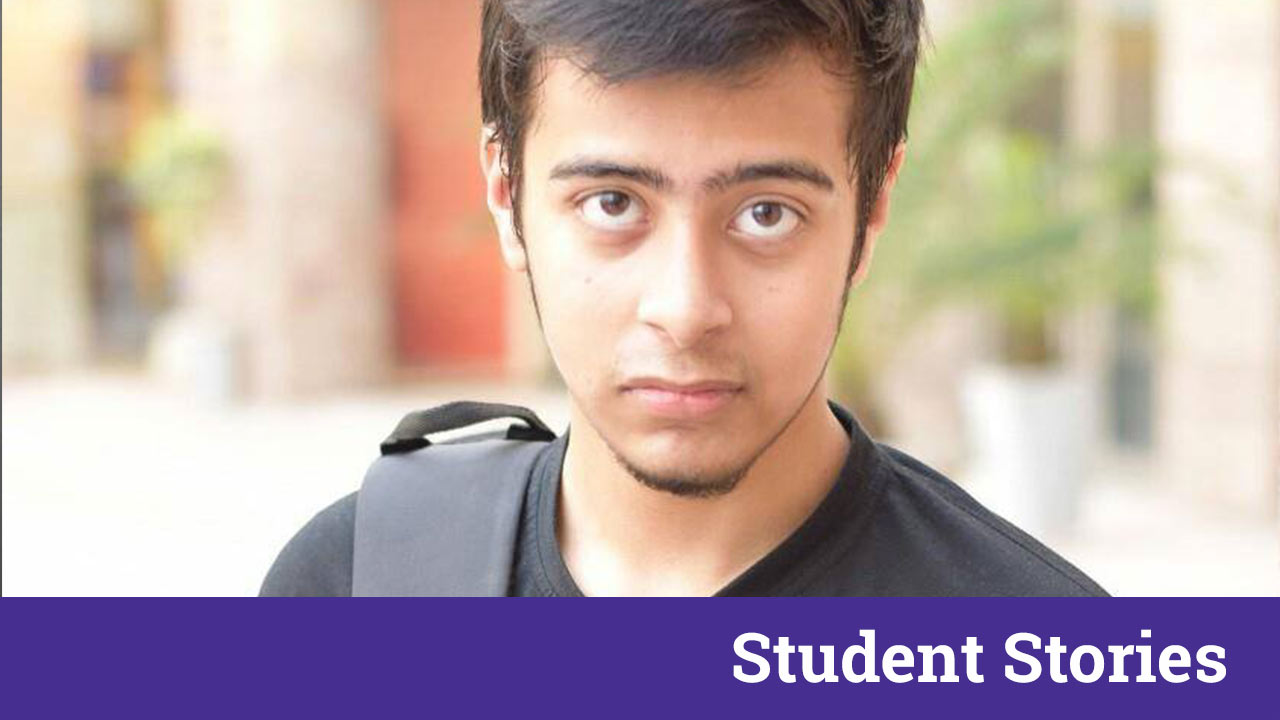 Meet Aishik Chakraborty, from Delhi. Currently pursuing English Honors from Shaheed Bhagat Singh College, University of Delhi and also learning Spanish as a part time course in DU. Apart from this, get  introduced  to  his  world  of  theatrics  and  acting  which he has been doing for long. However,  his  latest Facebook  videos  have  gone  viral  over  the  internet  in  a  couple  of  days with million views and he is actually creating history with his great performances in the thatre group.  Let’s have Aishik in conversation with us.

In conversation with Aishik Chakrobarty :

1.Tell our readers about your educational background?

My schooling was from DPS, Maruti Kunj, Gurgaon where I studied humanities for my senior secondary examination. Currently, I’m in second year, pursuing English Honors from Shaheed Bhagat Singh College, University of Delhi and also learning Spanish as a part time course in DU.

2. What made you come up with Facebook videos? Why did you think of making them?

The idea of making videos came almost randomly one day when I was exploring my phone’s camera on a winter night when I realized I could do more than just click good photos and made a short horror film the same night. Of course it was an amateur attempt but it was better than nothing, right? As far as Facebook videos are concerned, that was an opportunity which I took because the criteria for the videos was suiting me.

3. From where did you get the inspiration or ideas to do the same?

Inspiration was all around me when I first saw the DU life. Everyone was into something or the other and that makes it such a happening place for inspiration to come naturally to you. My seniors, friends and alumni were all so talented in the creative field that it compelled me to create some of my own content.

Well, everyone had good or bad things to say about my work. My friends were happy and proud but they gave constructive criticism. Some others, gave me suggestions on how I could improve and I think that’s a good thing because I don’t want to be complacent with my work but constantly strive to make it better. Criticism is very important because it helps the person grow as long as someone is not plain demeaning your work without any reason. But then again, you can’t do anything about it. People will say what they feel. I’d just say that it’s easy to sit behind a keyboard and say bad things but it takes a lot more to do.

5. How much effort really goes in while coming up with whole new ideas, concepts so that the audience is not bored with the same old concept?

It takes a lot of brainstorming because in today’s fast paced world, if you cannot make your audience happy they’ll eat you alive, metaphorically. People in the creative field, whether it be dancing, singing, acting etc. are trying so hard to establish themselves and create a niche. But it’s really heartbreaking to see that the general public would rather watch meaningless videos and listen to nonsensical songs and ignore the hard work being put in by others.

6. How do you find success in this field?

Well, since I’m still an amateur and trying to figure out stuff I can’t say much about success but what I can tell you is that you have to keep at it. You can’t go on and off about it. You have to keep the people hooked to your work. Also keep meeting people and collaborating with different teams and artists. You get to learn more and reach a wider audience.

I have thought about it, yes. But I feel I’m not ready to be a full time YouTuber as it takes a lot of commitment and I’m still a student with a lot of conditions going on. But I do have a tentative plan of joining a professional theatre group soon.

ALSO READ 19 Year Old Borrowed 60K From His Parents, Now His Startup Is Worth 5 Crore ! The Climber Man Bringing A Revolution In India !

8. Any funny or embarrassing moments?

Once, my college theatre group went for this outstation cultural fest at one of the best collegiate cultural fests of the country, can’t name it for obvious reasons. Our group came prepared with two plays for the competition and thankfully both the plays got selected and we got a chance to perform. The play that I won the first position and our picture was published in the DU Beat page. The fest organizers told us that the certificates would be sent to us later through courier but when they arrived they had the other play’s cast and crews names written on them. All we (the winning team) received were participation certificates. It was funny and sad. I don’t know how could they make such a big blunder.

9. You have done theatrics right? Could you share an interesting experience from there?

Last year we were making a play and my character had to wear a specific type of pants in the play. On one such performing day, I forgot to bring along my costume and I couldn’t tell anyone about it because I was petrified. I was terribly scared of my director because he was a very particular person when it came to these things. It was 1 hour prior to my performance when I realized this and then it was too late to go back home and get it. But the college where we were supposed to perform had their annual fest going on so that gathered a lot of audience. I finally told one of my co actors who’s also a close friend about the situation and we started looking for guys all around the campus who were wearing anything remotely close to what I was supposed to wear. After a lot of crying and mental breakdowns and my director calling me constantly asking me where I was I finally decided to go to the washroom to freshen up. In the washroom, we finally found a guy wearing what we were looking for, he turned out to be really nice and understanding and we exchanged our pants. It sounds so awkward now. But everything went fine after that, we also came second in that competition.

10. What is the most memorable and funniest project?

The most memorable and funniest project would be a spoof which I directed earlier this year. To give you a little context, the DU theatre societies make amazing street and stage plays every year and all the teams are very close to each other. So the spoof was a mixture of the street plays made in the year 2016-17. It was performed in front of all the teams and we received immense hooting. But the memorable part of it really was just sitting and brainstorming with my team mates and cracking inside jokes with each other.

11. Anything that you have created that has gone viral?

Not yet, but I have appeared in two videos which have gone viral. They were videos about stereotypical Bengalis Mmade by MensXP. Hopefully someday I’ll make something of my own which goes viral.

12. What advice would you give to a video-maker just getting started?

I’m a starter myself and I’d just like to say that if you find this field interesting or exciting you should give it a try. Don’t lose hope if people don’t view it or are not liking it. You now have a better idea what they’re looking for. Mould yourself accordingly but don’t lose your own identity for the audience. Keep making content and meeting like-minded people, they’ll help you work better.