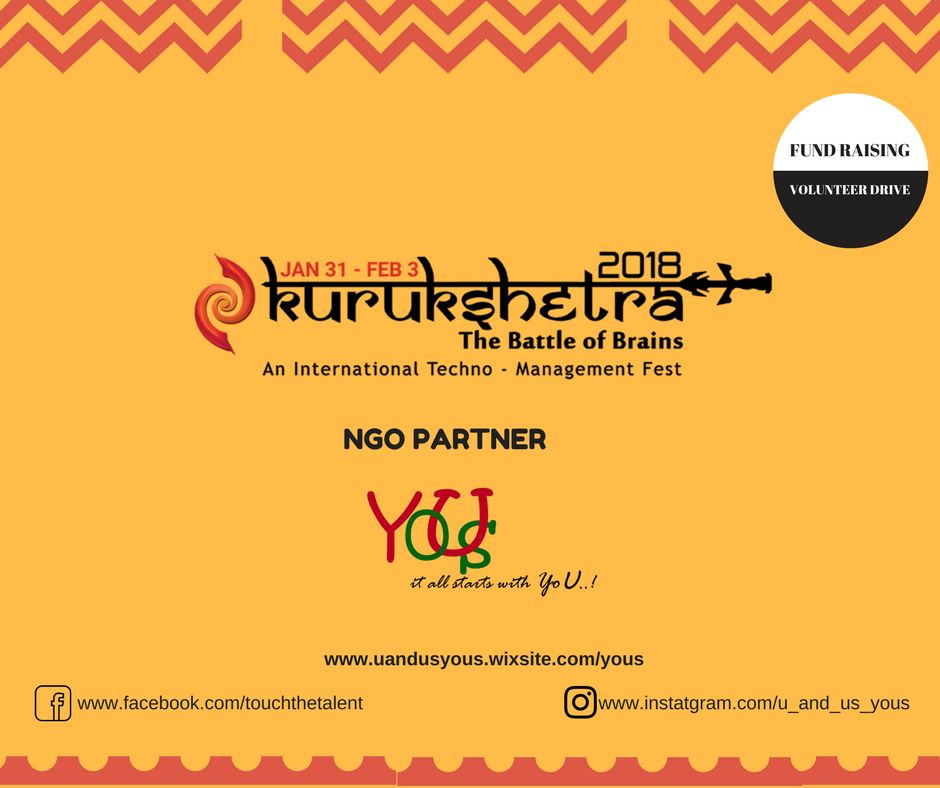 College of Engineering, Guindy (CEG), Anna University, Chennai, India’s oldest engineering college along with its rich legacy stands gloriously at the forefront of technological augmentation and innovation. Started as School of Survey by Michael Topping, the institution is ranked as one of the top ten engineering colleges in India today, renowned for its stellar alumni and faculty members
CEG Tech Forum (CTF), completely student-run, ISO certified organization, was initiated in 2006 with the singular purpose of nurturing any outcome of creative thinking and provide a robust student limb for its development. It is the technical hub of the college. With a keen focus on projects catering to societal requirement and its progression towards a community of a stronger cognizance, CTF stands a true social body.

With a desire to showcase the technical geniuses’ schemes on display for the collectively large and passionate scientific community, Kurukshetra – International cfest of CEG, was introduced in 2007. As one of the sub continent’s most glamorous brain fests, Kurukshetra stands out in terms of its enormous footfall and undeniably large cash prizes. It is one of the few fests in the country to have procured the UNESCO patronage – the highest form of support granted by the organization, thereby placing it in league with some of the most prestigious endeavors in the world.

The 12th edition of the fest is happening between January 31st – Feb 3rd, 2018. The fest has grown in every way since its inception. The Inauguration Ceremony, scheduled on 31st January, will be graced by the presence of the Honourable Governor of Tamil Nadu, Shri. Banwarilal Purohit, which will then be followed by an array of eclectic events and workshops conducted between 10 AM – 6 PM for the next three days.

This edition features 35+ competitive events in 7 domains namely coding, engineering, extravaganza, management, quiz, online and robotics. Some of the most sought-after events are Godspeed, Robowars, Datathon, Alcatraz, Ninja Coding and Civil-Ex, to name a few.
At the heart of the 4 day-fest are workshops, designed to fuel the critical thinking capabilities and provide a platform wherein students can augment theoretical concepts with hands-on experience. Kurukshetra ’18 features 12+ workshops in technology (Blockchain, ArduinoSat, Deep Learning etc.) as well as other domains (Management 2.0, Sports Journalism, Film Direction) conducted by renowned companies such as IBM and Samsung and an exclusive workshop for school students, namely Krithi.

CTF provides an excellent platform for the students of CEG to express their zeal for technology, by transforming their ideas into functional products that have marketable potential. A wide range of inter-domain projects aimed at tackling social and environmental issues are exhibited every year during Kurukshetra. Some highlights of this edition include Piezoelectric roads, Braille printer, Library sorting, Cardio care, Land surface temperature modeling and Single-wheeled scooter.

A perfect blend of science, art, and culture incorporated in an unfathomably brilliant way along with the exuberant element of fun and frolic, K!arnival sets the festive mood that Kurukshetra is best known for. Sumo Fight, DRDO exhibitions, and Gamindrome are some of the highlights of this edition.

K!Awards, one of the flagship events of Kurukshetra, presents a glamourous platform that brings out unsung personalities and showcases their achievements in technology or any other field, for the world to see. This year’s awardees are T. Mithra and K. Sharani Priya, Ponni, Praveena Solomon, Gopalakrishnan & Vijayalakshmi, Selva Chidambaram and Ezhil Arasan. IPS S R Jangid, the real-life inspiration for the film, ‘Theeran Adigaram Ondru’, will be the Chief Guest for the function.

Kurukshetra is a fest that is not just centered on technology but also works on initiatives that focus on the betterment of the society. One such initiative is Neon Cyclothon, a social initiative organized towards the cause of education of under-privileged children. The cycle marathon will have a massive participation of 300 cyclists, riding inside the CEG campus on the evening of Feb 1st. Being the first of its kind, it will also a record-breaking event.
Altogether, the 12th edition of Kurukshetra, under the support of the Ministry of Electronics and Information Technology and the National e-Governance Division, Government of India, promises to deliver an enlightening and enriching experience for all the participants.

He Has Sketched The Famous Scene Of DDLJ and P.K ! Meet The Marvellous Sketch Artist Anand Sharma!
Get Ready To Witness The Asia’s Largest Technical And Entrepreneurial Festival Hosted By IIT Kanpur – Techkriti! 15th-18th March It Is!!
Comment