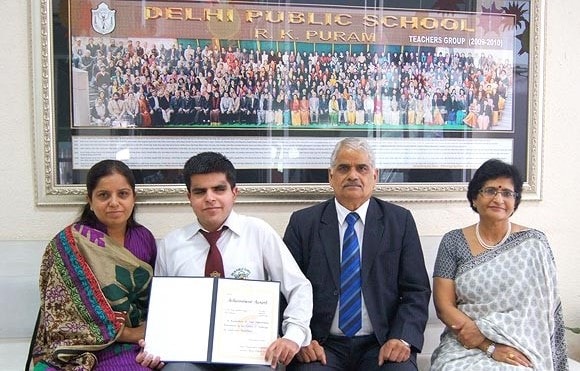 Meet Kartik Sawhney the Delhi boy, who hit the roadblock and made it to the Stanford University, US. After being denied  a chance to appear for the IIT JEE exam, he started trying out for foreign institutions. He was diagnosed with Retinopathy of Prematurity which left him totally blind since childhood. But his hard work and determination finally paid off. Kartik, a student of Delhi Public School, RK Puram, aced his class XII CBSE exams with an exciting aggregate of 96%. Scoring 99 in computer science and 95 each in English, mathematics, physics and chemistry, with a total of 479 out of 500 he also got the acceptance and 100% scholarship at Stanford University in the United States. He had to fight on to pursue his passion “Computer Science”.

He was provided with training and grooming at the National Association for the Blind, Delhi from quite an early age. Kartik soon became aware and was determined to cut short the tremendous effort put  by his mother to transcribe his reading material into Braille. He soon started learning how to use a computer with access technology. Being an exceptional student since childhood he brought many laurels for the school in diverse events. His achievements ranging from academic Olympiads to model UN conferences, music competitions to programming contests. Academically, Kartik emerged as the Class “topper” since class V. He was also selected for the National Talent Search and the Junior Science Talent Search scholarships – two of the most prestigious scholarship programs in India.  He was honoured with the National Child Award for Exceptional achievements. It is the highest honour for children in India.

Technically very competent, Kartik uses all assistive technology available for people who are blind. He is also a strong advocate for the rights of persons with disabilities.

Kartik’s highly impressive Resume speaks thoroughly that “Nothing is impossible if you have the passion and the will to achieve something.”

In conversation with Kartik Sawhney:

Q. As a child what was your vision of what you wanted to be?

I was introduced to a computer with a screen reader (think of it as a talking computer) in the 2nd grade. Since then, I was so excited about it that I decided that I wanted to do something in the field of computer science. Of course, I did not understand the specific roles in the field at that time, but this became much clearer to me as I moved along. In fact, I specifically remember (and sometimes find it fascinating) that in an interview in the 5th grade, my answer to what I wanted to be was “I want to be a Computer scientist”.

Q. While growing up what was that biggest support that helped you keep motivated to face the challenges that came up? Your most memorable experience till now?

The biggest support was my family, friends and teachers who were always with me to support me in any way they could. For instance, my mom and grandfather would dictate several pages of text patiently because they were not otherwise available in accessible formats. My friends would sometimes call me after school to make sure that I had not missed out on any work. My teachers would go out of their way to ensure that I understood the concepts. It was an amazing support system.

Q. Was there any situation when you felt that the challenge was too much? How did you come over it?

When I decided to study science in the 11th grade, there was no role model to look upto, and all the resources (textbooks, ways to understand diagrams, lab resources etc.) were not available. While I had somehow secured the permission to study science, I was now confused. I started questioning my own decision, and so did several people who were very close to me. That was a difficult time. I’m glad though that I did not give up. Yet another challenge when I felt very low was when IITs denied providing me the reasonable accommodations I needed to take their entrance exams. It was discouraging to realize that all the efforts that I had put in towards preparing for the exams would go in vane just because a bureaucrat could not understand my request for accommodation. My strengths who helped me during this time were again primarily the people around me (my family, friends, teachers and school administration) as well as my passion for Computer Science which did not let me give up.

Q. What are your favorites/hobbies? Who is your role model?

I enjoy singing. I am a trained Hindustani classical vocalist, and performed at several occasions as a child. Coming to Stanford too, I was a part of a South Asian  Cappella group-it was a lot of fun! More recently, I’ve also been trying out outdoor sports (most recently, I went for a hike).

As regards role model, it probably has to be Dr. Kalam. I had the opportunity to meet him once, and something that he told me still is the guiding mantra of my life. He said, “Kartik, remember what you need to succeed is not vision, but a vision.”

Q. When IIT-JEE denied, what were your thoughts that helped you take that successful step?

I strongly believe in the transformative role of mentors. When IITs could not provide me the reasonable accommodations I needed to take the entrance exam, I was shattered. But then, a teacher and a mentor encouraged me to think beyond the country, think out-of-the-box, but not let anything come in the way of my dream. That is exactly what I did. Fortunately, I have relatives who live close to Stanford, so I could get a lot of information about the application process and general stuff. That was also comforting for my family, since they were very apprehensive about sending me all by myself.

Regarding the application, the mentor helped me a lot. He was a US university graduate, so had a lot of experience.

Q. You are truly an inspiration to the whole world! What is your message to the youth of the nation and especially to the differently abled students who find it difficult to move on in this uncertain world?

If there is something that I have learnt from my experience, it would be that do what you really want to do. If you’re putting in everything that it takes to achieve what you want to, the universe will conspire to make things happen for you. I know it is very cliché, but I truly believe in it. Regarding people with disabilities, first accept who you are, realize your strengths and limitations. Then, capitalize on your strengths.

Q. In Stanford what are the facilities that help you get around the challenges that you face?

Stanford has been very different from my experiences in India. The community is very accepting and accommodating. People don’t think of me as a “blind student”, but a “Stanford student who enjoys computer science, who likes music, and who, BTW, happens to be blind.” There is a big distinction there. This attitude change is the biggest difference. More specifically, some of the accommodations that I get at Stanford include:

1. All my textbooks in accessible formats (I no longer have to type ~50 pages as I had to in India).
2. Exams in alternate format (I take my exams on a computer, email my answers to the professor who then grades them)-similar to India.
3. Disability golf cart service to get around campus.
4. Lab assistance when required.
5. Note-takers for classes that have substantial visual component.
6. Verbal descriptionists for classes that have visual components.

Q. What are your future goals? How are you planning on to achieve them?

Regarding my future goals, I have two plans:

1. I am passionate about artificial intelligence and natural language processing, and I hope to develop these skills further. I have tried to do that through internships at IBM Research and Microsoft as well as work with Stanford HCI group.
2. I feel strongly about equal opportunities for people with disabilities, and have been involved in a wide range of projects and initiatives over the years. Some of them include project STEMAccess (to encourage blind students in India to pursue science, provide them the support, mentoring and resources, and work with institutes of higher education to make them accessible), work with Leonard Cheshire’s Young voices (on projects such as accessibility of Delhi Metro and amusement parks), work with the UN (providing feedback for post-2015 development agenda, sharing my views at the UN General Assembly, among others) etc. Most recently, I am working on a startup nextbillion.org to connect students with disabilities excited about tech with professionals in the space. We successfully completed our first cohort of mentorships with participants from 10 countries recently, and just launched applications for the second cohort. I hope to continue working on this.

Q. What are your words to live by?

Just believe in yourself. There will be ups and downs, but at the end, things work out.