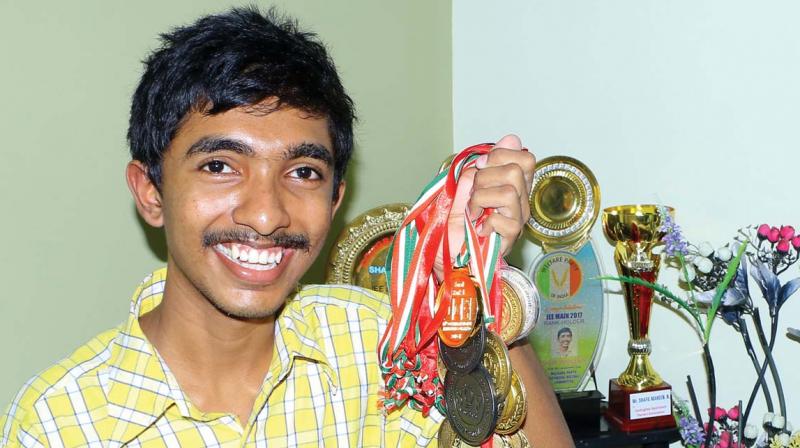 Shafil Maheen N, of Rays Public School who hails from Timur, has added laurels to his hat not once or twice but thrice by being AIR 4 in JEE Advanced 2017, AIR 8 in JEE Mains 2017 and undisputed AIR 1 in KEAM 2017. Shafil Maheen N has given all the credit to his parents who relocated from their ancestral place for the betterment of his studies, to reduce his stress and not let him face it alone. He holds deep gratitude for his parents and school teachers who helped him reach this success.

Let’s catch up with Shafil.

1. What was your reaction upon knowing your rank?

I was splendid to know my rank as it was completely unexpected. I felt that my marks were not good enough for a good rank but somehow it happened. My parents and teachers are also very happy with my performance.

2.When did you decide to study engineering? Which branch of engineering would you be interested in the due course?

Actually, I don’t want to study engineering. I want to pursue B.S in Mathematics from ‘Indian Institute of Science’. I decided to study Mathematics when I was in class IX only because I liked it and wanted to study more of it. I wanted to crack these exams in order to test my own self but, my sole aim was to pursue my studies in the subject of Mathematics alone.

3.When did you start your JEE Advanced preparation?

I started my preparation for JEE Advanced from Class XI onwards. I had no strategy as such. I concentrated on my weak areas. I revised my weak areas again and again especially ‘chemistry.’ I used to read the text book a lot.

4.There is a month gap for the JEE Mains, elaborate on your preparation strategy?

5.What are the benefits of coaching according to you?

My school itself is an entrance coaching center so I didn’t have to go elsewhere for coaching. It was a very big advantage for me that my school provided me with coaching because that helped me save my time and efforts to go outside my school and study. My school used to combine regular classes with the entrance exam classes.

6.How extensively did you practice previous year papers and mock test papers?

I practiced all the mock tests provided by my school. They used to give two mock tests in a week and this happened regularly during two years of preparation for the exam. I think those mock tests only helped me crack the exam.

7.Which subject according to you was the most difficult one?

You may also like : He has created history in JEE with his determination ! Meet the wonder boy , Kalpit Veerwal who scored 100 percent in JEE Mains !

8.Whom do you owe your success to and what are the main factors that affect the mind of a person?

I think it’s my parents who helped me get through the examination. We stay at Tirur but for my studies they came to stay with me in a flat at Kozhikode. They did not put me in a hostel. They stayed with me during my preparation. My teachers were also very helpful, they conducted regular mock tests and that helped me a lot.

Don’t miss : ISC & WBJEE Topper in 2015!! JEE AIR 9, This Young Lad, Arkya Chaterjee Is A Role Model For All The Aspiring Engineers.

He has created history in JEE with his determination ! Meet the wonder boy , Kalpit Veerwal who scored 100 percent in JEE Mains !
Google Wants This 15 Year old ! Meet The Self Taught 14+ App Developer | Nitesh Yadav
Comment