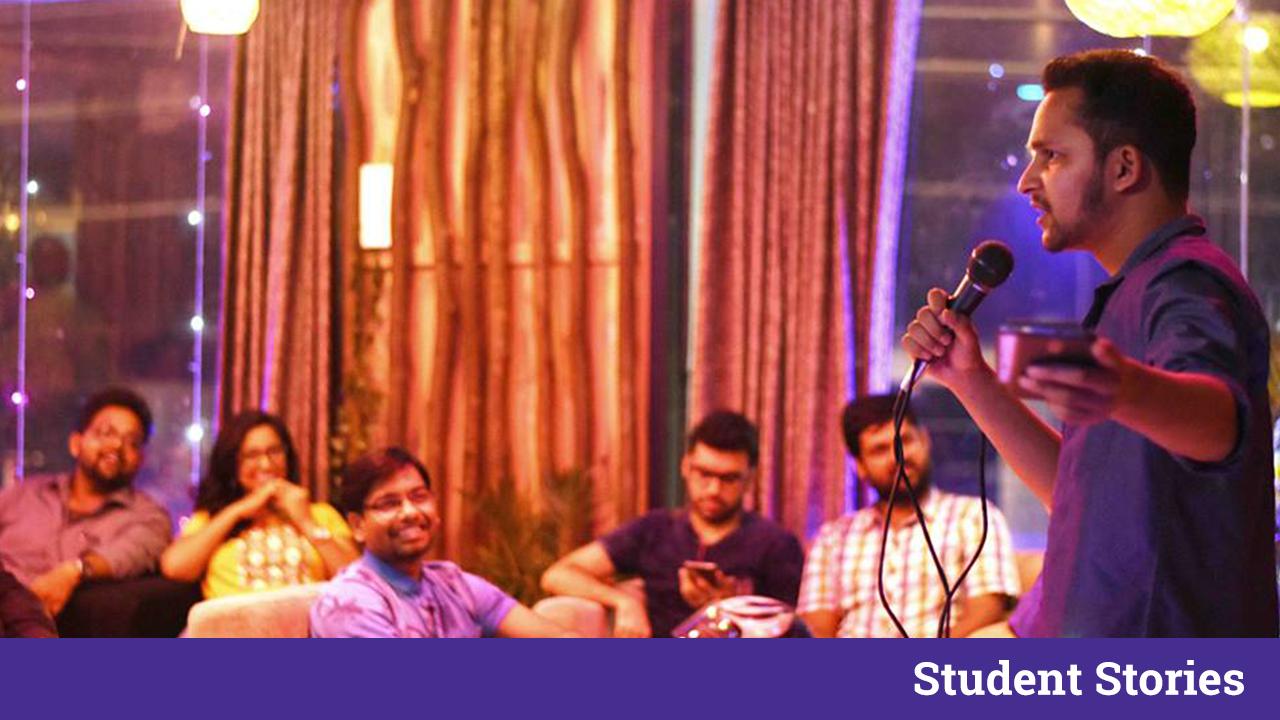 Meet Satyabrat Mohapatra from Bhubaneshwar, Odisha, a 23 year old Stand-Up Comedian, dancer and engineer. He is the Co-founder of Bhubaneswar Komedians, the premiere standup comedy group of Odisha and also qualified for Top 100 of Laughter Challenge 2017. The very first comedy group established in Bhubnaeswar, Bhubaneswar Komedians is a group of local comedians trying to develop a culture of humor in the smart city. Their star invites have been personalities like Nishant Tanwar, Nitin Mirani and Manish Tyagi. They organize open mics almost every two weeks to hunt for new talents for their group.

What makes your stand-up comedy unique and different from other comedians?

Well, my content is more of observational type and relates with the student crowd more. I also do mimicry of a couple of cartoon characters just to stand out and do something really unique.

Sometimes when people go shopping for clothes they will see something they really like, but they won’t buy it because it doesn’t go with anything else in their wardrobe. Do you ever come up with jokes that aren’t in your voice that would not go with your act, like something dirty or really political, so you don’t use them ?

If it’s not in my voice, I would never come up with it in the first place. Say for example, Dark Humor. I don’t look like the guy who would go on stage and do dark comedy, It’s like Rajpal Yadav casting in an action sequence. I do appreciate jokes of other genre though .

A friend of yours just got married a month ago. He is also pursuing a career in standup comedy. Any advice on how to make that work?

Ah! I’m sure now he’s getting laid more often than he was as just a comic. Married comics often get more content just by sitting at home and observing the regrets  love of their lives. Warning: Don’t offend her.

Tell us about a moment in your comedy career that you’re particularly proud of.

There are multiple moments. It’s been a year and a half that I’ve been doing this. The best and the most memorable moment as I recall was when i gave my first autograph in April this year. I guess, “First autographs are always memorable.” Also, my personal fan moment was meeting renowned comic Abhishek Upmanyu.

Do you find that your style of comedy works better with some audiences than others? What strategies do you use to adapt with different audiences?

Yeah ! That is why I do more college shows than corporate. I was bombed heavily in a corporate gig once. I keep writing youth oriented material, be it adult or clean. A comedian has to know and understand his fan base composition well. The strategy is to not adapt rather make the audience adapt to the kind of comedy that you do. That’s how your fan base despite being restricted to a particular age group, increases manifolds.

Ideas do get repeated, I wont deny that and there is only so much you can write about a particular topic. Interpretation and execution, however are wider topics. Like for i-phone kidney jokes are mainstream right? But, my set on the same always kills it. So it’s a successful joke if people say – HEARD THE CONTEXT BEFORE, BUT THIS WAS DOPE!

What emotions do you feel your jokes brings forth in audience?

Remorse – if it’s an engineering students crowd which mostly is. It’s fun making them drool over their life decisions.

Given a case that you have totally failed to impress the audience what will be your source of motivation for the next show? And how will you deal with the criticism which many people cannot?

Well, as a matter of fact, failure is the best motivator. If I’ve bombed in a show, the next show has been a super-kill. That’s how you grow as a comic. Open mics are where comics test their material. We barely take untested material to a show. Accepting criticism is subject to analysis. If it’s constructive, it’s welcome. Else, there is only so much time to waste on people trying to pull you down for no reason. But yeah, it’s fun to have both fans and critics.

Haneet Narang Spills Beans On The Inside World Of ‘MTV SplitsVilla 10’ ! He Has Got All The Inside Secrets Of The ‘Reality Show’ !
A Fan Base Of Millions At Just 16 Years Of Age ! Learn Serious Blogging Lessons From This Insta Famous Blogger- Ramya Pasupuleti
Comment