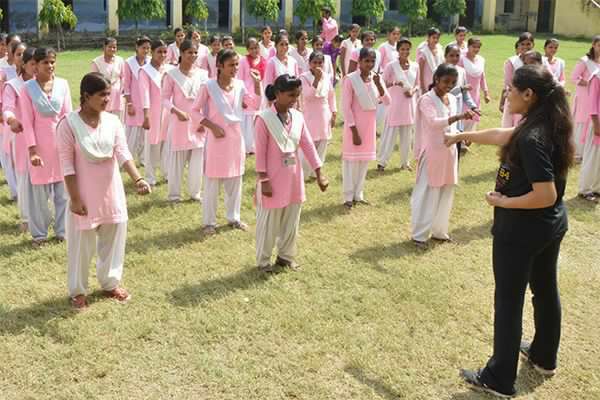 Awarded the 2016 Gloria Barron Prize for young heroes only at the age of 19, Pooja Nagpal grew up experiencing the magic of India. But after learning the gender based violence experienced by young girls and women, often without the protection of law, Pooja could not stand by. She attended the Mira Costa High school, California (US). Trained in street fighting and various other forms of martial arts, Pooja Nagpal is a second degree black belt in Taekwondo and started learning it at the tender age of just 5 with the spirit of a fighter and next what happened is really inspiring.

This Indian American girl took flight to India this summer 2016 and trained 600 rural women as well as girls in self-defense across rural backwaters of Himachal Pradesh. Winning the title of a National Young Woman of Distinction in 2015, Pooja has armed over 1000 socio-economically challenged women with self-defense techniques in the past four years. She supports gender equality and believes in the virtue of social work.

On having achieved the Gold Award from the Girl Scouts of USA, Pooja Nagpal founded a non-profit organization, For a Change Defend, to promote martial arts as a weapon of self-defense for underprivileged school girls. Pooja has also planned to get a safety mobile app for women so that they can connect with the local police in times of sexual harassment.

Q.1: When was the first time  you wanted to learn martial arts?

I began martial arts when I was about 5 years old. I enjoyed the discipline and mental strength that came along with this unique sport. I have continued for this reason.

Q.2: How did you come up with such a great step for women? Familiarize us with your start.

I started teaching in 2013, the summer between my 9th and 10th class in high school. I traveled to a small village called Subathu in the upper mountains of Himachal Pradesh and taught martial arts for about one month to 40 girls in a school (age 14-18). The steps I created were a mix between Taekwondo and street fighting which I learned from various experts (former FBI agent, Turkish defense, among others). These moves are very practical (strength training but also directed at using the most effective defense skills for females). At the end of the month, I noticed a unique change however-not only were the girls physically more prepared, there was a distinct mental change that guided their educational aspirations.

Q.3: Having such glorious achievements added to your career, what do you aspire to be?

To be honest, at this point, I’m not completely sure! I just know that in life we learn these skills (at this point it happens to be self defense!) and it’s important to use those skills to help others. Right now, I am convinced that the future of effective social impact lies in using technology  (efficiently!). Right now I am studying Electrical Engineering and Computer Science at UC Berkeley, and hope to one day start initiatives, especially to empower women, using technology and software development.

Q.4: What role did your family play in your journey till now?

My family played a huge role. My dad especially has been very encouraging throughout this whole journey -and accompanied me with translating and everything. My mom is a huge advocate for these issues and I look up to both of them as inspirations for this journey.

Q.5: Tell us more about “For a change Defend”. What is the larger vision you have in your mind?

The larger vision is a world where a girl can be educated, fulfill her dreams and career aspirations without the fear of safety and gender barriers in her way. I hope this generation becomes leaders in this issue, and we do not continue to shy away from this problem. It’s important to address this decade’s largest issue.

Q.6:  What were the challenges you faced during your journey? What were your ‘Great Steps Ahead’ ?

Some challenges initially were definitely the language barrier, however this was quickly overcome through time! I began to train others to continue my teaching to make it more sustainable and effective & I hope that in the future,  more and more people become aware of the effectiveness of this program. I definitely see change in many places in India and more and more people are valuing this work thus leading to the betterment of the lives of women.

Q.7: Tell us about your role and responsibilities mentoring women as a part of this program?

My role is along the lines of a teacher (obviously the one teaching the self defense), but also an enabler of the women and girl’s vision. I believe telling a young girl to “become empowered” is not the solution. We all find strength in ourselves in different ways, and I have seen that martial arts and education are the best ways to remind ourselves that we have the confidence and ability to achieve.

Q.8: We see “For A Change Defend” playing a revolutionary role in the society, especially in the lives of women. What are your future plans?

(similar to answer in 5) I see a vision in the role of technology creating change. I also hope to see more and more people to be involved in “For a Change Defend”.

Q.9: What is your message to the aspiring young generation?

There is something unique about this generation I believe, especially due to the globalization through technology and the accessibility to information in the world. Cases regarding violence towards women have started to become more widely reported and more people are gaining knowledge that they may have otherwise not known. We now have data, evidence and data interpretations of the issues that affect society.
However, awareness is only half the solution. This generation needs to find a sense of obligation to be active. We can’t be indifferent. If you see something wrong, don’t look the other way. One person can create more change than you think.

Arushi Madan’s Fiery Passion to protect “Mother Nature” will crave you deeper!
Shubham Singh is changing the Rural Education scenario of India in the most efficient way
Comment