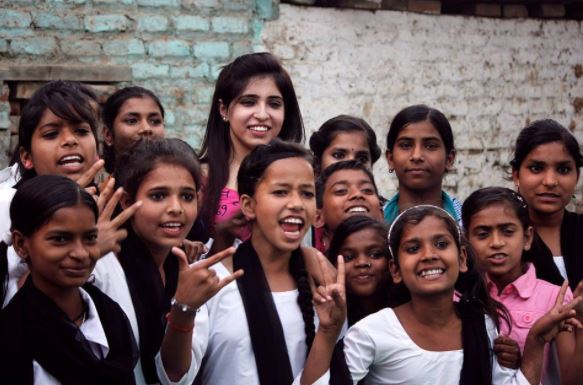 Rashi Anand is a social activist who is engaged in taking measures to uplift the underprivileged people. With this objective and in association with her mother she has established an NGO in 2005 known as Lakshyam for children welfare, education, health, and empowerment of women. She is among the youngest entrepreneurs and NGO owners of the nation.

1. What gave you the idea to start “Lakshyam”?

We see kids on the streets living life aimlessly. It broke my heart a few years back and it was then when I decided to put these broken pieces back by reaching out to them with love, kindness and actual care.
The very first idea to pop up in my mind was that of a Toy Library. Millions of children on roads of Delhi are begging, playing with old toys, plastic bottles while on other hand, if we compare them with our children, they spend time in good ambience, they have access to schools and costly toys.
The idea was initiated with making every child’s childhood special which is the basic human right. Collecting toys and other necessary items from various entities and then donating them among these kids, is a feeling that goes beyond every definition.

2. Most heartwarming story related to your NGO that you have experienced?

Chilling! That parents themselves give drug to their children, which is locally available in pan shops at a cost of Rs 5. Aftermath, the child gets semi conscious, becoming insensitive to outside environment and automatically his hunger dies. This feeling that parents could get this vulnerable that they would give a poison like substance to their kids, risking their life forever!

3. What were the difficulties you initially faced?

At initial levels, when I used to work on roads and under the flyovers, there were a lot of challenges. My freedom to security would be threatened at times as men standing there would comment or pass glances or would stare.

Though I don’t care about other person’s faith in me as such but at a young age even when asked for support, very few lent their support. There was a lack of trust and willingness to work with me.

4. How does it feel to see such a positive response from the world?

If I have to sump up in a word – Overwhelming! Its only when you change lives for better you realize how beautiful yours is.

5. What are your future plans with “Lakshyam”?

I want to take Lakshyam forward, to a level where it is seen as one prominent organization which is working rightly in the field which it claims to be working for. With positivity and sheer determination, this is what I seek.

Also read “An Epitome Of Selfless Service! “It’s Not How Much We Give, But How Much Love We Put Into Giving” | STASS Foundation“

6. A brief description in your words about “Lakshyam”?

I have my own NGO, named Lakshyam, which has been working towards child welfare and women empowerment for the last 10 years across India. The organization has three main programs butterfly, which is a child welfare program, rooh, which aims at women empowerment and the third one is toy library under which collection drives are carried out.
As we all know that we are living in a moment where atrocities against women are on a rise and so much of violence against them is taking place on a regular basis. So, I wish to stand for their holistic development, along with taking the organizations programs forward.

An Epitome Of Selfless Service! “It’s Not How Much We Give, But How Much Love We Put Into Giving” | STASS Foundation
This Will Change The Way You See At Life. Story Of A Writer, A Professor and An Artist, Changing Lives
Comment