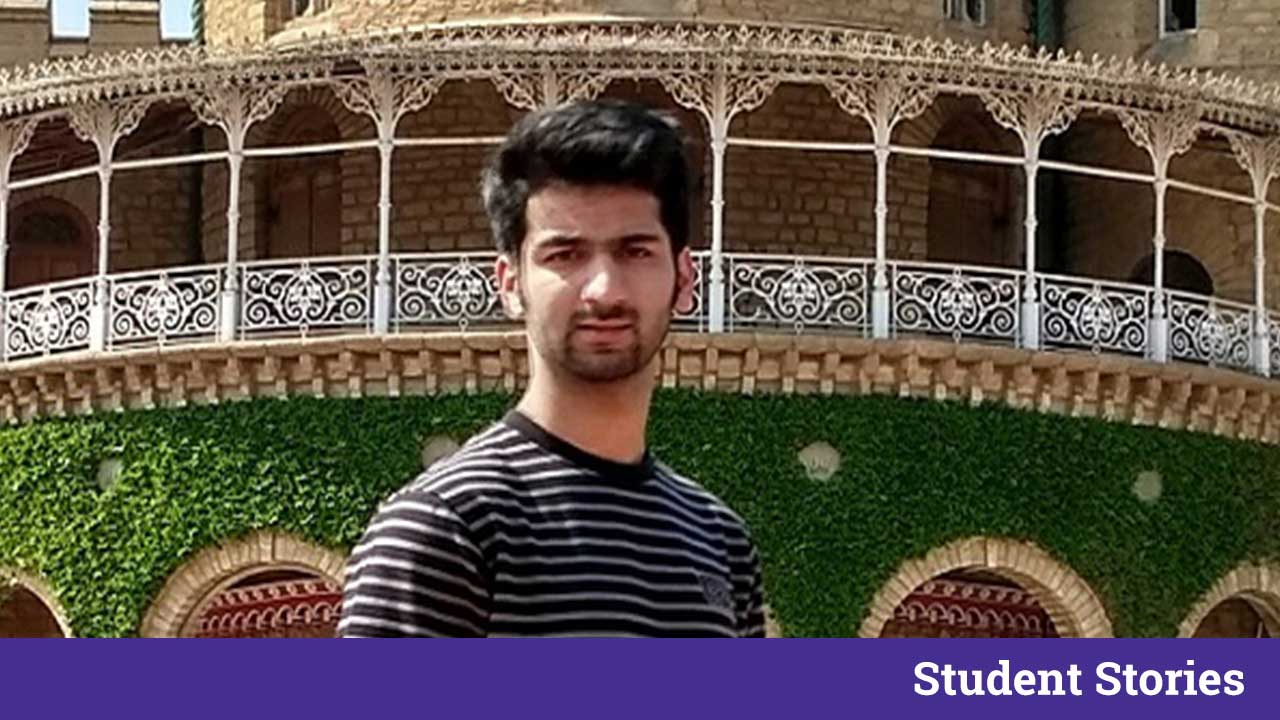 “Do not let the salt meet the wounds
Do not let these tears flow.
Instead, O’gardener!
Make gardens bloom,where a smile died.”

– A verse from a beautiful piece by Khawaja Musadiq.

Khawaja Musadiq, or popularly known as “poetofblues”, is a young poet of 20, whose writings are as beautiful as the place he belongs to, Kashmir. He started expressing his strong emotions regarding the fate of his motherland through his poems, that is how it all began. Presently he is pursuing his engineering degree in Bangalore. Khawaja’s writings have the strong emotions of pain and love, through which he tries to communicate with people around him. His poems like ‘Paradise Lost’ and  ‘Let the gardens bloom’ portrays the sufferings of Kashmir and the people there, where he sends a strong message to the world “Do not let Kashmir be written off the history. It’s been ages, my springs are caged, Let free my winds, let free! “. Not only is Khawaja Musadiq a very popular Instagram writer, but he has fan following from all around the world. His poems have been published in various websites and his works have been praised by all. This young poet seems to rise with every passing day.

Check out the quotes written by Khawaja Musadiq

Khawaja Musadiq in an exclusive interview with Student Stories :

1. What is poetry to you and how much important is it for our society?

Poetry to me is what it was to Wordsworth “The spontaneous overflow of powerful feelings.” My emotions recollected in totality is poetry, to me. Poetry as a genre has been really influential to our society. It lets you feel what you couldn’t even think of before. So, poetry is actually the drama of emotions and emotions are the most important part of humans.

2. Which one was your first poem about and how did you come up with it?

Some years ago, me and my friend Ubair, contemplating over our motherland’s fate during war thought of writing something about what stays with most of the Kashmiris, till they are victimized to death. My first poem was “Paradise Lost.” The name resembled to Milton’s paradise lost, and so did the idea. Just that Milton talked about man’s first disobedience and I’ve mentioned man’s persistent disobedience over the years.

3. Can you describe the time when you first realized that poetry was something you absolutely had to do?

I believe that we all are poets in one way or the other. We all feel, don’t we? Just that, some of us have the capability of penning down whatever is felt. So, this goes back to the time I wrote my first poem. That’s when I realized that I had something to contribute to the people. I had something in me, which could talk to people, about their own selves. I had something, which belonged to them. I had them, with me. All the time. That’s when I decided that poetry is what shall happen to me, till I breathe last.

4. How does a poem begin for you, with an idea, a form or an image?

A poem happens to me with an idea, a meagerly scanty idea. An idea, you would want to do nothing about. The idea happens first, followed by this sharp poem. This poem, so subtly sharp that you’d want to give away your life for the same.

5. There are many forms of poetry, among them which one is your favorite and which form do you mainly work on?

Poetry in any form should serve the purpose of relating to one’s innermost thoughts and desires. This can and has come up in many forms till date, my favorite being the free verse. This literary technique I’m talking of is free from all the rhyming patterns and any kind of meter. It employs no kind of jargon, yet providing artistic expression.

Differences in poetry have occurred because differences in eras happened. Victorian poetry was characterized by the struggle of working people, the Romantics emphasized on emotional and imaginative spontaneity. Today what we have is characterized by a self-conscious break with traditional way of writing. I prefer the one I’m living in. For both the poetry and the survival has to go hand in hand.

7. Among all poets whose work inspires you the most and why?

Poets are portrayals to me, wonderfully pictured portrayals of whatever the human contains or whatever contains the human, for that matter. My favorites are many, notably Agha Shahid Ali and Rumi. Every other portrayal has something extraordinary, but these two give me a very unique connect. They take me through the journey of their words, unveiling the most intimate details. Also Ubair , Mariya and Shah Sabia are little lesser known portrayals, but truly picturesque ones.

8. What do you try to communicate through your poems?

I try to communicate through my poems, whatever surrounds or happens to us. Humans have this tendency of enabling themselves to feel that they can relate to something or someone. I try to make this happen. I cannot brighten somebody’s pain, or lighten somebody’s sorrow. What I can do is communicate to them, that they aren’t alone. They have me or maybe several others like them. That’s what I do through poetry.

Poetry has given me memories, infinite. I remember meeting some really amazing people who are, because poetry is. I’ve found them, through and only with poetry. These are the lesser known portrayals I talked about − Mariya, Sabia and people. Also, I remember sitting at my place once. My uncle talked of my poetry to my father to which he asked what do I write about. The retort my Uncle gave to my father brings the deepest smile to me, even today. “He writes good, but I don’t really know what he writes about.” Moreover this constant appreciation from people is what keeps me going.

10. Where do you see yourself in the next five years?

Saying where I see myself in 5 years won’t be fair enough, because this is something I see everyday. I’m going to mention something that I dream everyday, a little bigger than yesterday. Every day my mind starts processing a thought into a poem, I see myself connecting with people, a little more than before. I wanted to write, because I wanted to tell people that whatever they feel isn’t theirs alone. I wanted to make their dense bones, a little happier, a little lighter. This is what I want today. This is what I’ll always want. And I see myself doing the same, for the next 5 years, eternity and beyond, if at all that’s even possible.

If I had a little life left and I was supposed to say one last thing to people, it’d be this,” Poetry isn’t something that is fiercely characterized by competition. Poetry is something that comes out of your soul, reaches out to the paper, forming beautiful patterns, communicating to whosoever reads the same. Poetry doesn’t involve combative zeal, it involves the peace of oneself. Poetry involves souls, and souls don’t compete. Bodies do.”

Meet Sumit Jain The Fun Rapper And Viner From Amity University,Noida ! His Catchy And Groovy Anthems Crossed 4 Million Views In Just Few Days !
Know How This Small Town Girl Made It To L’oreal And Airtel Ad Campaigns ! Ashi Khanna Has Set Some Serious Modelling Standards
Comment