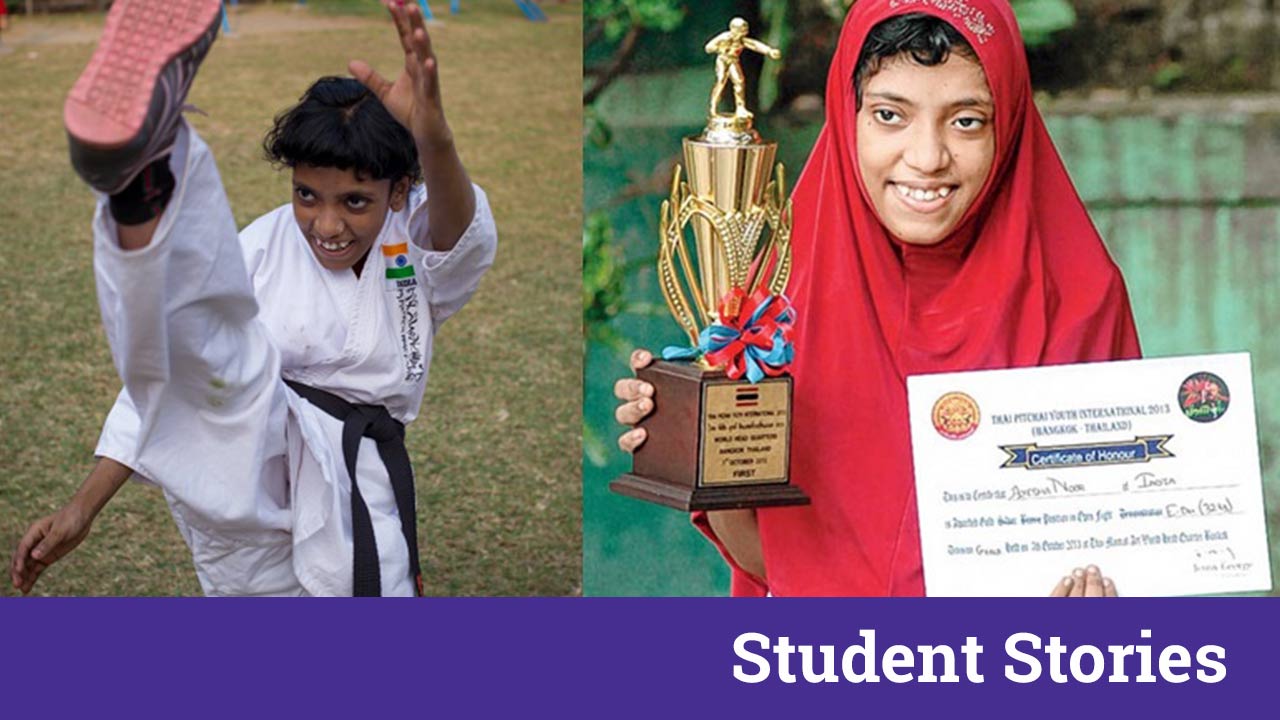 Ayesha Noor is Kolkata’s karate kid who has been making her family proud since she was 16. She was the only girl on her team to have traveled to Thailand for the Thai Pichai Youth International tournament, and win a gold medal. Being poor didn’t matter as monetary help poured in from well-wishers and even the State Government. After winning three gold medals at the international level and two at the national level, Ayesha, now 19, is taking her karate skills to a new level. She has vowed to impart self-defense and martial arts training to 1Lakh girls every year that too, free of cost. She has grand plans to take her initiative beyond borders, with India’s neighboring countries of Nepal, Bangladesh, and Thailand. What a true achiever ! Let’s know more about her in the interview below.

The 19-year-old karate champion is battling epilepsy and poverty to teach self-defense to underprivileged girls and women.

In a conversation with the Karate Champion : Ayesha Noor

When did you start your amazing career?

I started karate at the age of 6. My FATHER died when I was very young but my mother continued encouraging me after my coach MA Ali saw potential in me. The epileptic seizures did affect my health and in turn, studies at school, but this did not stop me from taking up the karate challenge. In fact, I found refuge in karate. At present, 600 girls as students are under my leadership with 11 trainers to oversee them at Ramleela grounds in Moulali area, Kolkata.

What made you put Karate classes free for women?

After the tragic Nirbhaya rape case in Delhi in 2012, I have been teaching self-defense for free. While my dream is to make this mission a success with support from my coach. When I heard that a girl was raped in Delhi, I decided to teach girls from marginalized sections of the society to defend themselves instead of getting scared, we need to learn to fight. The UK-based Remedia Trust has also come forward to support me in this with a small grant of Rs.50,00. However, most of this money goes into buying medicines for my treatment of epileptic seizures.

You have also been featured in a number of documentaries around the world? Which is your favorite?

Adding another feather to my hat, I may soon be honored by the US Government for the grit and determination to fight all odds and inspire other girls. I have already made inroads into the US after featuring in a documentary film titled ‘Girl Connected’ in 2016′, which focused on five women trying to fight gender discrimination. The film was made by ‘International Television Services’, a US network. The documentary film, which also features four other girls from Kenya, Jordan, Bangladesh, and Peru, has been screened across the US.

Does your Epilepsy ever come in between your noble moto?

I become a Sherni (tigress) when I teach karate. I had epileptic attacks twice and sometimes, even three times, every month. But, my physical disability never comes in the way when I teach karate. I don’t get four meals a day, forget about competing in International events. Sometimes people gather and manage to arrange for funds, but most of it goes in buying my medicines.

You have not only overcome gender biases but also racial biases? How?

I live with my family in a one-room house on Mofidul Islam Lane in central Kolkata’s Beniapukur, a humble small dwelling clogged between two biryani shops where I can hardly stretch properly. Every Sunday, I teach self-defence to young girls and women. Some of them wear burkas, some come in sarees and many haven’t had any formal education. But that doesn’t stop them from “learning to fight”. I want them to become Maa Chandi (referring to the Hindu goddess epitomising Shakti, the cosmic female force that fights evil.)

“It has been a struggle. My father died, my mother sews for a living. Food at home is short. But my parents always told me to work hard and I did. Thanks to my coach, MA Ali. Without him, nothing would have been possible”

Team INFERNO Ranked #1 in India and #9 in Asia Builds Super Mileage Cars That Cover 240 Km Per Litre ! Meet The Team Of Superheroes From Sir. MVIT-Bangalore
The NGO Which Is Changing Fate Of Millions Of Under-Privileged Children : Saakshar
Comment